California’s Assembly Bill No. 705 will change how De Anza College places students into classes as it requires schools to consider high school coursework and grades when assigning new students into mathematics and English courses.

The purpose of AB 705 is to help increase graduation rates among students who enter college underprepared. The bill states that California community colleges need to, “maximize the probability that the student will enter and complete transfer-level coursework in English and mathematics within a one-year timeframe.”

According to studies from the Public Policy Institute of California, standardized placement tests are typically inconsistent in placing students in courses.

“While over half of colleges reported using the Accuplacer test to assess college readiness in math, cut-off scores ranged from 25 to 96 out of 120. Students with the median score of 58 would be deemed college ready at only half of these colleges,” stated the Public Policy Institute of California.

Kristin Skager, Chair of De Anza’s Reading Department, confirmed that De Anza’s English courses already comply with this provision. Even if “a student tests into the lowest level of reading and writing, they can theoretically finish those classes and English 1A in one year.”

The Community College Chancellor’s Office stated that although the bill became effective on Jan. 1, the Office “will issue guidance that provides phased-in implementation.”

Karen Chow, President of Academic Senate, said that placement for math has already started to consider high school GPA, and that English department is getting its new placement system off the ground.

“We are going to be using high school GPA as a multiple measure,” Chow said. “That combined with the current placement tests, will be considered.”

Although he got bad grades in high school, Raymond Wang, 18, undeclared major, said that “it would be a great idea to take high school GPA into consideration,” because it shows a student’s mindset.

Maddie Bachtelle, 24, biology major, said that community college is a chance to start over for many students. “When you turn 18, maybe you deserve a chance to just prove yourself over again and be treated like an adult.”

The state wants to implement a disjunctive placement model, Chow said, which would only consider high school GPA if it would boost a student’s placement.

Despite its good intentions, Skager said that the bill has a few problems. “I think we all want what is fair for students. That’s the most important thing, because students are adults.”

Because of this bill, Skager said, incoming students could be placed into courses they are not prepared for. Although high schools try to prepare students for college, some students need more support.Chow said that consideration of high school GPA for placement in English courses will be implemented this quarter.

The Foothill-De Anza Board of Trustees plans to increase student wage to $15 an hour in January 2021, which may result in student employee lay-offs, a... 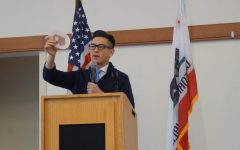 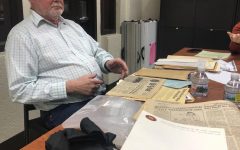 Phillip Plymale, champion of the almost 50-year old De Anza Flea Market comes to check in on his work and meet with current DASB Senators 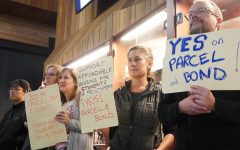