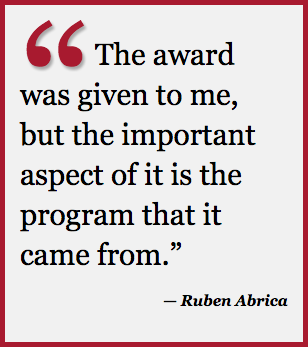 A De Anza College professor was recently presented with a social justice award by the American Muslim Voice Foundation for his high level of involvement and activism to unite cultures and ethnic groups within communities.

The foundation presented Ruben Abrica, a Latino studies and Spanish instructor, with the Cesar Chavez Social Justice Award. The award is given to individuals who have demonstrated a high level of commitment to social change and activism.

The American Muslim Voice Foundation is a nonprofit activist group focused on fostering friendships among all Americans, regardless of culture or religion.

Born and raised in Mexico, Abrica immigrated to the U.S. as a teenager. He received an M.A. in education from Stanford University.

After helping to found the city that he lived in, East Palo Alto, he became the first Latino mayor. Abrica served as mayor of East Palo Alto in 2005, 2009 and 2013. He currently serves as a city council member.

“The award was given to me, but the important aspect of it is the program that it came from.” Abrica said. “There has been a high level of hatred towards Muslims recently, especially with the current Republican campaign.”

The award was given to me, but the important aspect of it is the program that it came from.”

As someone who grew up in Mexico, I definitely understand what it feels like to be hated on by our society. The awards they give out are efforts to connect more people to their program. When any community is targeted or attacked, the worst thing to happen is for them to be isolated.”

Abrica’s push for social justice is reflected in his community involvement. Abrica has worked since the founding of East Palo Alto to improve the lives of those in his community.

“East Palo Alto has been a ‘minority-majority’ community for the past 50 years,” he said “Our city experiences this in an area where most communities are not. Working with the people of my town has taught me that we need to not only raise up different groups, but unite them and work to solve common problems.”

Abrica said he understands the importance of identity and culture within an ethnic group, he believes that the most important issues must be accomplished with different minorities coming together and working as a whole. As a professor, he hopes to inspire students.

“The gap between these groups are growing, economically and socially,” Abrica said. “People are hurting, and those who use scapegoating know how to tap into people’s feelings and get them angry. It’s important that students are informed and active.”

Abrica said he encourages students to involve themselves in their communities.

“It’s not enough to read and study to discover yourself,”. You need to be an active part of your community.”