Only 9 of 20 function properly 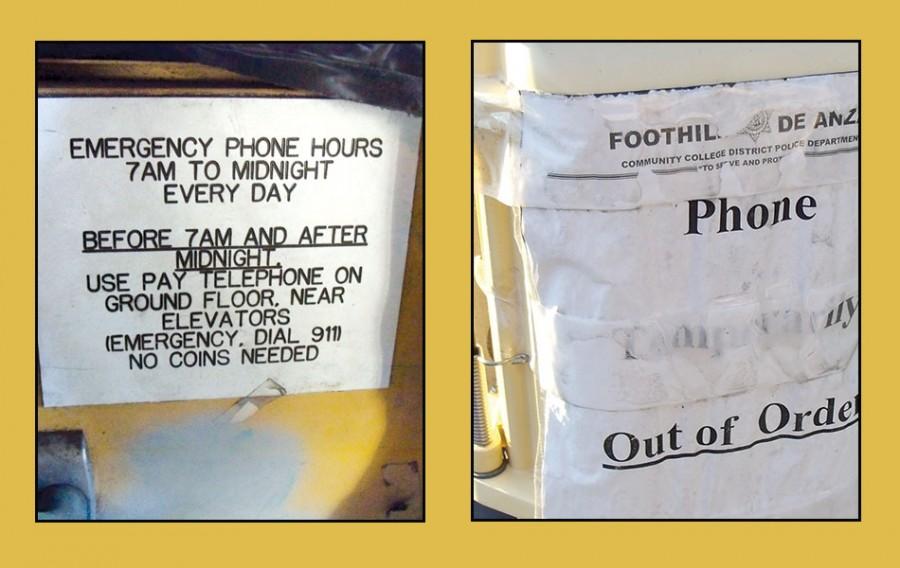 Only nine of the 20 blue emergency phones on the De Anza College campus are working and fewer than half are displayed in their proper locations on the De Anza map.
“A lot of students don’t know that we have these things,” said Karla Navarro, 23, studio art major. “Personally, a blue light phone doesn’t allow me to feel safe.”
In a campaign for safer campus lead by the Students for Justice Club, students created a poll to see how effective these emergency phones were.
“They’re not that effective,” Navarro said. “Students don’t know how they work or that they’re here.”
Students can call FHDA District Police at 408-924-8000 if they can’t find a working emergency phone.
“That does not make me feel safe,” said urban planning major Cecilia Ng, 22.
Signs on several of the boxes housing the emergency phones state that they are only available from 7 a.m. to midnight and anyone who needs emergency services at other hours should access campus pay phones.
With the Jan. 28 sexual assault on campus, the main focus of student conversations on safety has become dark and isolated areas of the college and the lack of security measures on campus.
“We want students to feel safe on campus, and to understand that it is indeed safe,” said Marissa Spatafore, the associate vice president of Communications and External Relations at De Anza.
“Any type of violent crime on campus is extremely rare, as our published figures show. We also encourage students to program 408-924-8000 into their cell phones for an on-campus emergency in order to expedite dispatching; as you may know, 911 calls are routed to the nearest cell tower.”
Until the college completes repairs, students and staff should call 911 in the case of any violent crime, or call campus police for an escort to their vehicles or buses if they are leaving campus late or have any specific concerns, Spatafore said.
“The college does want to ensure that all are in working order,” she said.