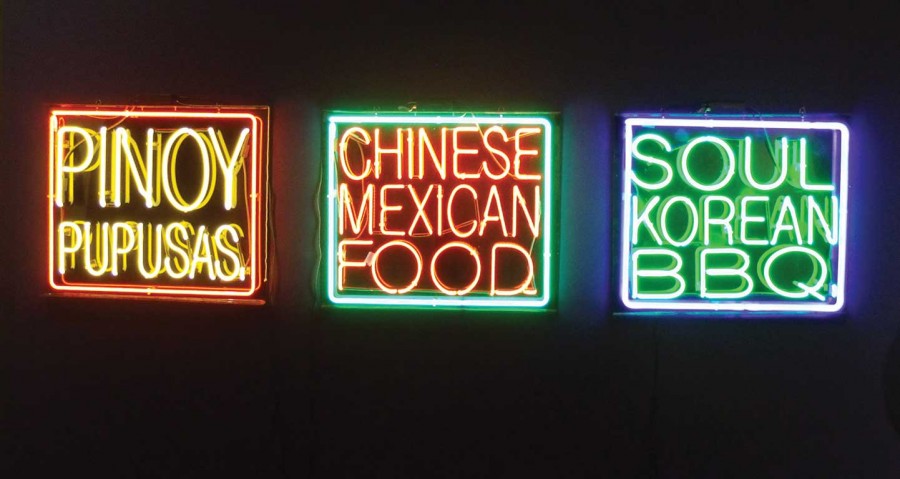 Neon signs made by Patrick Martinez for the “Mooncakes, Churros, and Cherry Pie” exhibit which opened at the Euphrat Museum of Art on Feb. 2 and runs through March 19.

“Mooncakes, Churros, and Cherry Pie.” If this seems like a odd assortment of culinary confections, that’s because it is the name of the latest art exhibition at the Euphrat Museum of Art at De Anza College.
Featured artworks include a set of photorealistic fruits and vegetables made entirely out of blown colored glass as well as a set of neon signs by
Patrick Martinez.
“I feel like this is my once-a-year Project Runway.” said Diana Argabrite, museum curator. “Normally when you curate a show, you get a year to five years to research and think.”
The event is based on three books chosen by Silicon Valley Reads: “We need New Names” by NoViolet Bulawayo, “The Book of Unknown Americans” by Cristina Hernriquez and “Stealing Buddha’s Dinner” by Bich
Minh Nguyen.
The theme for the exhibition is the integration of different cultures into American culture as a melting pot with aspects of cultural integration
and experiences.
“Bringing together a very diverse set of artists to create a new dialogue on a central theme is so fulfilling.” Argabrite said. “If you have a few minutes between classes there’s no better way to spend it than coming over to this building and view art that you probably wouldn’t get the chance to see anywhere else.”
The exhibition, organized in collaboration with Silicon Valley Reads, opened on Feb. 2 and runs through March 19 with a reception on Feb. 18 from 5:30
to 7:30 p.m.
“I’m excited because the food will be particularly good,” Argabrite said.
Among the foods will be a set of 200 churros from the Hipolito Cerda, owner of Olimpos Churros, set to be delivered for the event’s reception. Cerda is known as the Super Churro Man and sells churros at many Bay Area events including San Jose Giants and San Francisco
Giants games.
“I’m excited about the performance and I’m excited about the food because Patrick Martinez and Sandra Low will be flying in just for the reception,” Argabrite said.
Patrick Martinez and Sandra Low have been well known in the Los Angeles art scene since the 1990s and their works have been featured in places like the Carnegie Art Museum and Chinese American Museum.
“Students will be able to meet them and talk to them,”
Argabrite said.
De Anza president Brian Murphy will be the master of ceremonies for the reception and there is a scheduled performance of African drum and dance from Acoma Arts.
“Each artist has something unique and a story to tell.” Argabrite said. “I’ve never seen blown glass done with the textures and details.”