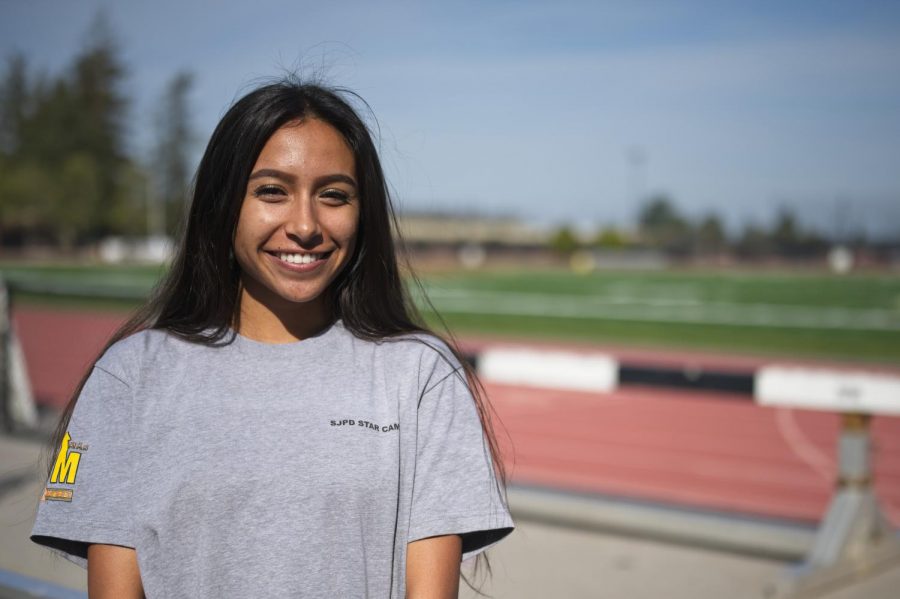 Leslee Patino, 20, psychology major, has won four of her nine races this season and finished off the podium once.

Leslee Patino, 20, psychology major, is putting the competition on notice. The sophomore distance runner has won half of her individual races this outdoor track season and has finished off the podium just once.

The season got off to a hot start for Patino, who started racing in the ninth grade at Piedmont Hills High School, when she won both her races in the first meet of the season.

“I started off with a really good personal record at the Monterey Peninsula College Open Meet,” she said. “I had two personal records in my 5000 and 1500 meter runs.”

Patino aims to break five minutes in the 1500 meters, which she hopes to accomplish soon, given that she ran under 5:03 twice this season. Other season goals seemed a little less concrete.

Patino’s talk about wanting to compete in the state championships to visit Disneyland and enjoying the steeplechase may cause a casual observer to question her competitive drive.

However, those close to her are well aware of the passion she brings when racing. She is not only super competitive, said head track and field coach Nick Mattis, but one of the best distance runners in the state, with the results to prove it.

“I have no doubt she’s going to be in contention to win every race she steps on the track for this year,” he said.

Patino’s fellow runners said they appreciated her dedication as a teammate and her skills as a team leader as much as her strengths as a runner.

“She puts the team first and she disregards everything else,” said distance runner Tammy Dinh, 18, computer science major.

“She’s good at including everybody, even if it’s not in track, specifically,” said distance runner Tyler Stowell, 21, business major. “She’s good at being friends with everybody.”

This welcoming personality was immediately clear in Patino, who projects a remarkably friendly attitude and is quick to help those around her.

The combination of personality on the sidelines and perseverance on the track make Patino a formidable asset for the team, and her range of talents make her a versatile point-scorer for Mattis.

“She is a compassionate person that wants the best for everybody, and she’s our best distance runner from 800 meters on up at just about every event,” he said.

Patino said she hopes to bring her talents to a four-year school, and has so far received offers to run at two universities in the area, but doesn’t know whether she’ll take either of the offers at this moment. Right now, she’s just enjoying her time at De Anza.

“I’m kind of just doing life,” she said. “Just going with the flow.”