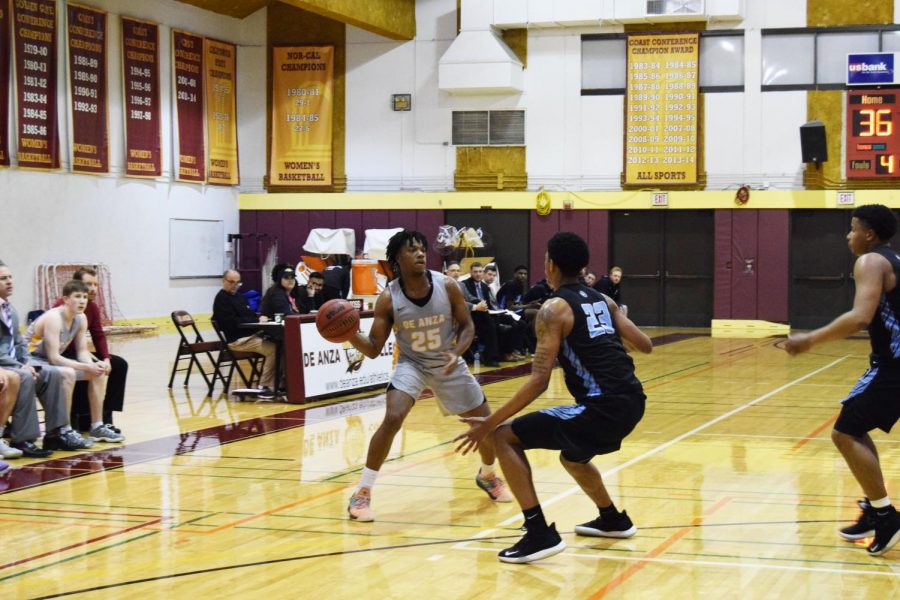 Aaron Tomlinson, 20, psychology major is on Feb. 14 looking to make a pass on Feb. 14 against Cabrillo College.

De Anza men’s basketball team took a hard loss on Feb. 14 against Cabrillo College, ending all hopes of making it to the postseason.

Having already lost once to Cabrillo on Jan. 22, De Anza knew they needed to up the pace to win the game.

The team did the research needed prior to the game and really adjusted to the fast movement of the opposing players.

The goal was to beat them at their own game by speeding up the pace in order to make it almost impossible for turnovers to occur.

The fast pace saw players take no longer than five seconds of holding the ball before passing.

Aaron Tomlinson, 20, psychology major was penalized for flopping and received a technical foul during the last minutes of the second half.

It was a serious game changer and he made his feelings heard.

“To be honest, I was just devastated,” said Tomlinson. “I couldn’t believe the call but like we preach all season: get to the next play.”

Tomlinson added that his forward focus is not on the past losses but the victories in the future.

“Right now the focus is to go finish the season strong,” he said. “To get ready and be ready for next season.”

The team is now hopeful of a better outcome to next season since their conference hopes have gone down the drain.

“We played well defensively,” said Bryce Ahrens, 20, business major. “We just didn’t score enough and we shot 8 of 16 from the free-throw line.”

Aherns keeps his facts real and hopes high about the next games after reflecting on the loss.

“We slipped up at the end of games too many times but I feel we should win these last two,” he said.

The Dons’ last two games will see them play away to West Valley and then close the season out at home against Hartnell College on Feb. 21.