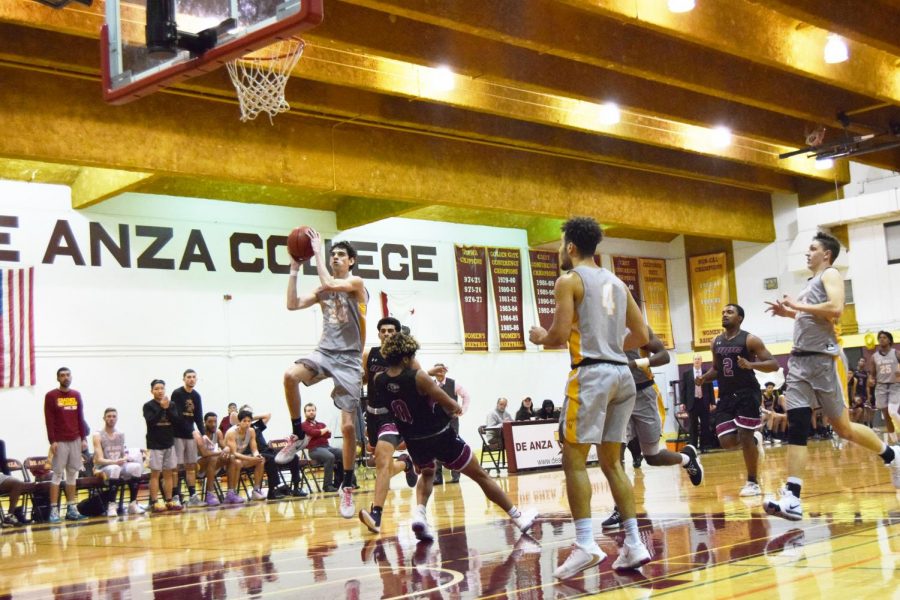 Bryce Ahrens, 20, kinesiology goes for the layup before receiving a foul.

The De Anza Men’s basketball team defeated Monterey Peninsula by a slim score of 57-52, leaving a few games left in hand before the conference championships.

Both teams played intensely both on the offensive and defensive side with De Anza creating a comfortable lead at the start.

De Anza took the lead in the first half with a score of 28-13 and the crowd cheered for the team’s efforts.

John Vergara, 20, kinesiology major said the team did pretty good on the defensive end and got what they wanted offensively.

But one of the major downfalls of the game was the high number of missed free throws that occurred after the half.

“We had some turnovers that could have given us a 21 point lead instead of a 10 point lead,” he said.

“We shot 8 out of 16 and that’s not good,” said Bryce Ahrens, 20, business major. “Our next step is to continue buying into what we are all trying to accomplish and that includes sharing the ball and playing hard defense.”

Besides turnovers and missed free throws, the team’s main focuses are simply to get better and work hard on their preparation.

Vergara said that it’s necessary to review the opposing team’s performances before and after game day in order to improve themselves.

“We always do scouting before every game,” said Vergara.

Scouting gives the players an increase of knowledge on who they are going up against and what each opposing player might bring to the game.

Players also said the hard work from head coach Jason Damjanovic and assistant coach Ryan Sheehy reflects on the team’s success and commitment to becoming better in each game.

De Anza now has an overall record of 11-13 and a conference record of 4-4 with only a couple games left in the regular season.