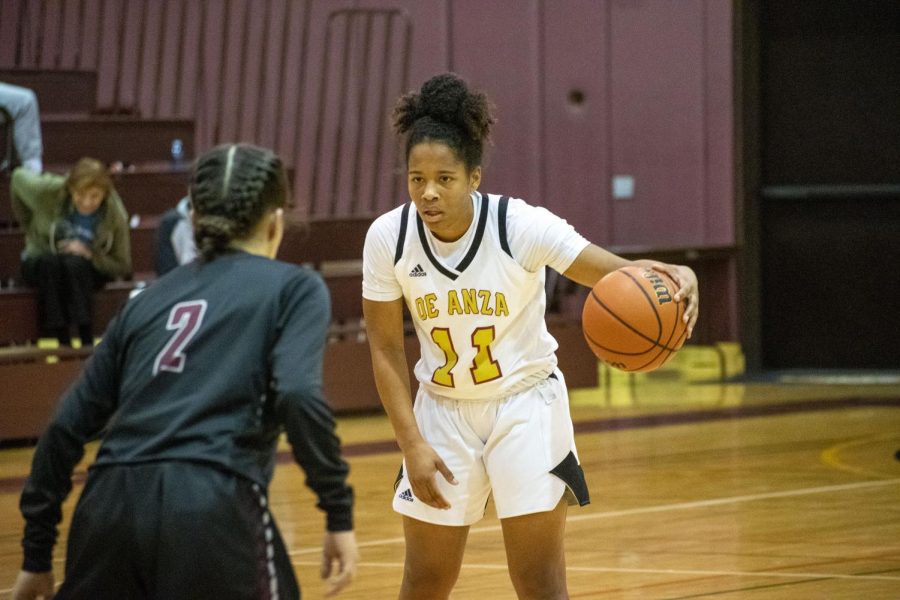 The De Anza women’s basketball team extended their win streak to three as they respectively beat Monterey Peninsula College by a score of 73-52 on Feb. 5.

Prior to tipoff, head coach Michael Allen said that they had been executing all year and they were ready for this game.

The coach’s confidence was mirrored by the players before and during the game.

De Anza managed to outscore their opponents in every quarter to secure the win.

The standout performance of the game was done by Anisah Douglas, 19, kinesiology major, who logged a triple-double, scoring 26 of De Anza’s 73 points to go along with her 10 rebounds and 10 steals.

The strong defense forced 22 turnovers out of Monterey Peninsula and did not allow them to make a single three-pointer all game.

Tahila Sherlock, 18, liberal arts major, said she felt confident about the team’s performance before coming into the game.

“The chemistry we built over time feels like a win,” said Sherlock.

Danielle Gezzi, 19, kinesiology major, is averaging 17.4 points per game this season, ranking her as one of the top scorers in the coast conference, per CCCAA. She scored 15 points in the game.

The team now has an overall record of 14-10 and 6-2 in the conference. With only four games left in this season, De Anza’s women’s basketball team is looking prime for the playoffs ranking second in the conference.

Allen said that with another win in the bag his team is one game closer to winning the conference.

The next meeting for De Anza is an away game against Gavilan College on Feb. 12. Having already beaten them once this season, the team is anticipating another win.