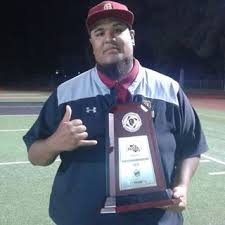 De Anza College students and staff mourn the loss and remember the life of assistant football coach Nate Garnica, who died on March 17.

He succumbed to heart failure at his grandmother’s house and was unable to be revived, head football coach Tony Santos said. He was 34 years old.

He coached at De Anza for a little over one year, after playing for the team in 2008 and 2010, Santos said. He also coached Junior Varsity football and was an assistant wrestling coach at Andrew P. Hill High School in San Jose.

He always radiated a positive attitude and was an eternal optimist, said Santos. These traits helped he connect with the students he coached and he shared this attitude with everyone.

“He genuinely cared for the kids,” Santos said. “He reached out to a lot of kids on our team about giving them confidence to succeed.”

He was always interacting with players and making sure they were doing well, and did his best to encourage and support the student athletes on the team, defensive line coach Nate Tia said. “Coach Garnica made everybody feel like they had a chance at success.”

As a coach and community member, helping those around him was an important part of his life. “He was somebody who was very caring and giving,” said Tia. “He was all about his community.”

He didn’t strive for money or power, said Tia, but coached “out of the kindness of his heart, and just to really give back.”

Coach Garnica’s heart was always in the right place, said Santos, and he sacrificed his time to give back to others.

“He gave to others. He loved other people unconditionally,” said Santos. “I want people to know that his lifetime was an example of giving back.”