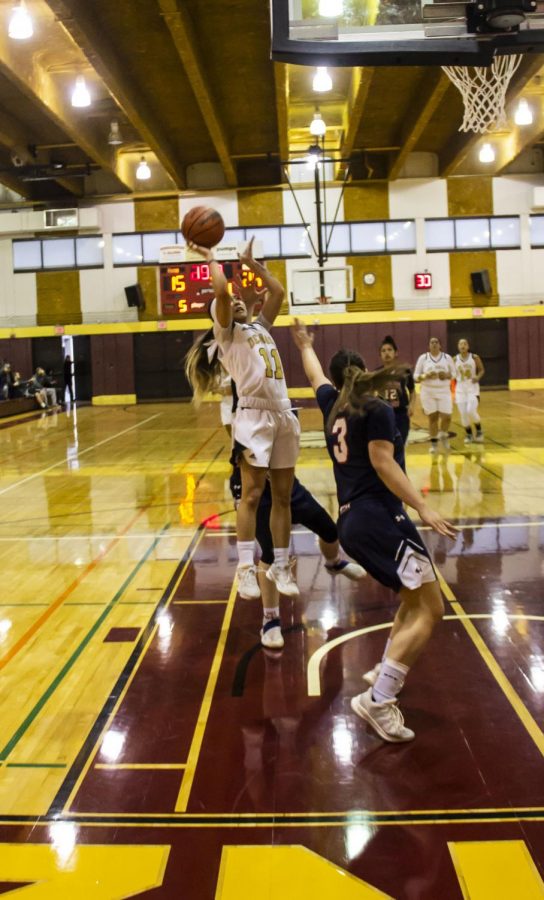 Guard Doryn Gomex makes a successful shot attempt over an opposing defender during a home game on Feb. 13.

The score was close as De Anza scored the last two shots, only to give a foul in the last few seconds.

“Having such a close game, I think it’s difficult not to be upset about it,” said guard Doryn Gomez, 19, psychology major.

“It all came down to the little things and what we did during the game and throughout the game,” Gomez said. “We will continue to play with heart and dignity, always knowing that we are going to have each other’s backs as a team.”

Guard Rilizza Isla, 19, psychology major, believes there is plenty of room for improvement.

“I feel like the energy in the beginning was like not really there until towards the end,” said Isla. “We could’ve capitalized more on some of the turnovers that they had and that could’ve put us up a little bit more, but the hustle that we had at the end, I think that if we had that throughout the entire game, we would’ve been really good.”

Head coach Mike Allen was appreciative of the spectators who showcased continuous support for the players from start till the very end.

“A win or lose, does not dictate who they are, where they’re going or what they want to do,” said Allen. “The most important thing to me is to develop them, not only as basketball players, but strong, young women leaders.”

Allen also singled out forward Natalie Ramos for praise. “That young woman has worked her butt off and to get to where she is today, at the very beginning it was very hard for her,” said Allen.

“But to see her in the game at some of the most crucial times, seeing her compete by grabbing some key rebounds and getting some key stops, that’s the joy. That’s the win for me.”