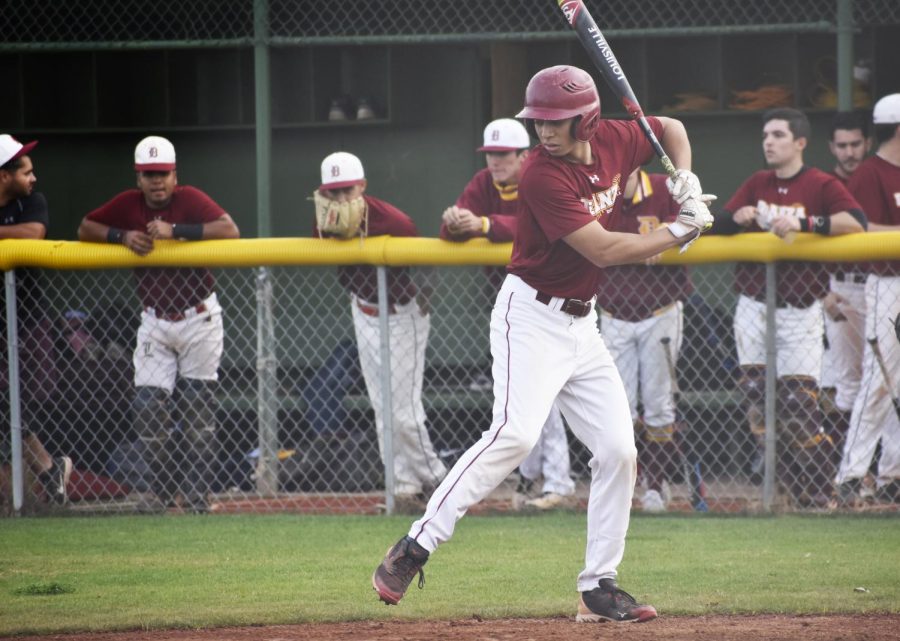 Samio Uze, 18, business major, Third Baseman, getting ready for his round on the scrimmage game.

The De Anza College Baseball team are prepared for their season this year, with hopes of clinching a playoff berth.

Despite the gloomy weather, pitching coach Matt Risko assures that no problem is too big for the team to overcome.

“It wouldn’t be De Anza baseball without a little bit of adversity with the rain coming in buckets the last couple weeks and the smoke taking out a good amount of practice time, but they always found a way to get better,” said Risko.

In preparation for this season, Risko explained how practices for the fall season differed largely from the ones in winter.

“The bulk of the time in the fall is spent making sure the pitchers arms are conditioned. Now that we’re approaching the first game on Friday the practices have changed to simulate live game situations and make sure everyone is mentally and physically ready for a long season.”

Jaren Washington, 20, child development major, is in his second year playing for the team and he believes that they have a good team this year.

“We are going to be a very hard team to beat. We have a lot of very good talent. We just need to do our individual jobs and play like the team I know we are,” said Washington.

“This is the most talent we have had here and if we stick together as a group and work together to get the job done every day, we will surprise a lot of people in Norcal.”

With their opening game against Yuba, third basemen of the team, Sean Rooney, 19, business major, is looking forward to the start of the season.

“It should be a fun two-game series against Yuba. We opened up against them last year too and won both games, so hopefully we can repeat that this year,” said Rooney.

The men’s baseball team just opened their season against Yuba College on Jan. 25 at home.