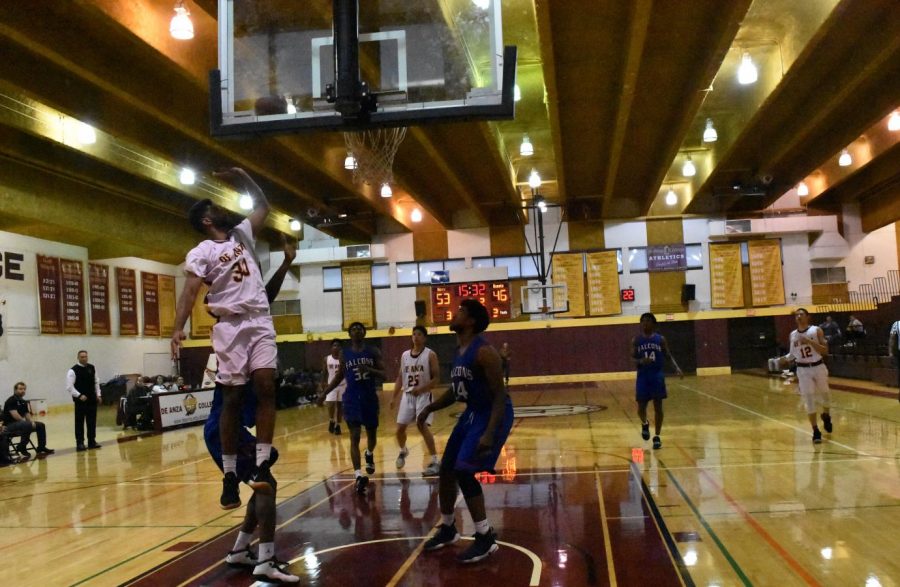 Ajay Singh(#30) bullies his way in the paint and finishes with a tough basket.

The De Anza Dons’ first home win of the season against West Hills Coalinga on Nov. 24, solidified their strong start to the season, moving to a 3-1 record and leading the State in scoring at 93.5 points per game.

“I felt like I played good,” said center Ajay Singh. “I was attacking the basket earlier on in the first half. That was working pretty good,” said Singh

Freshman point guard Tariq Swanigan shot 7 of 11 from the field, scored 16 points and assisted three times to help lead De Anza. ” I would never say I satisfied with it,” said Swanigan. “I just tried to get better each game, try to score more to help my team win and assist more.”

De Anza led by eight points in the first half, but West Hills College Coalinga Falcons jumped out to a 80-79 lead with less than two minutes left in the second half. “They were able to let West Hills get back into it when they had a lead and sometimes that happens,” former Athletics Department equipment manager, Tom Giebler said.

“We started out good and then we just kind of let them back in the game. But we closed it strong and finished the game,” point guard Darien Davis said.

“There were some technical fouls on West Hills part that really hurt them,” said coach Jason Damjanovic. “I thought our players played very poised and composed the entire game. That probably had a big thing to do with our win tonight.”

With the help of Singh grabbing the defense rebounds along with other team assists’, the Dons outscored the Falcons 86-84 until the buzzer.

“The players have good court awareness,” said Darien Davis’ mom. “As the league evolves, as they get closer too, they’ll get more confidence.”