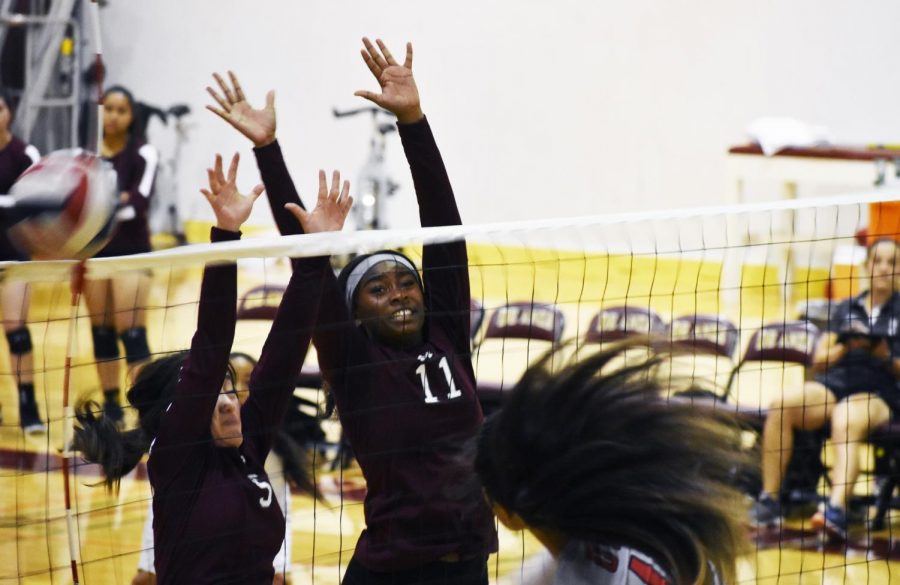 Kayla Thor and Nia Burns missing a attack from Foothill.

During the first set the Dons showed attitude, Allie Pereira was one of the players that scored the most with the help of her teammates. Danica Vukcevich had a great spike scoring, that stood out before ending the first set.

Both teammates Pereira, and Danica did a great save during the second set, while both teams were trying their best to win. The Owls were trying to fight back but lacked saves and the Dons took advantage.

The roles changed during the third set, when the Owls started off fighting right back at the Dons. During the set both teams kept on scoring back to back until the Dons messed up on a few saves and lost the third set.

“We played with a lot of energy which it really helped us, we were up to two sets, we were confident and they came back with two sets so it shows that we can’t relax and the last set we pushed through,” said captain Daysha Patalot, 18, biology.

The audience showed support as they cheered with enthusiasm for both teams as soon as the fifth set started with both teams tied and both showing confidence for a victory.

De Anza changed the way they were playing the two sets they lost, and played with a winning mindset during the fifth set, winning the game with a spike.

“I feel very happy we won, I didn’t want it to go to five. We started off strong, and we relaxed a little bit during third and fourth set. I was happy that they pulled it out during the fifth,” said Coach Dawnis Guevara.