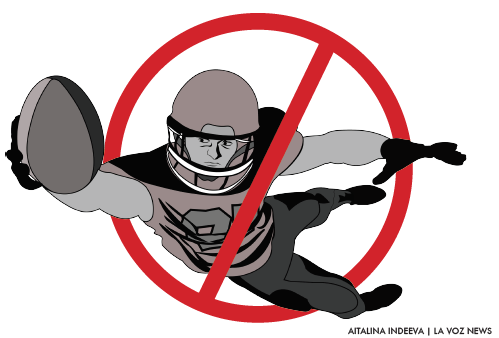 College football is a pastime culturally embedded into the social fabric of American society, a ritual of entertainment and pride.
But college is first and foremost an environment dedicated to education; there is no inherent reason beyond tradition for football to remain in the academic setting. In fact, there is no reasonable justification not to ban institutionally endorsed football on college campuses outright with the physical and neurological damages it has been proved to inflict.
Football physically is brutal on the individual that’s playing.
Unsurprisingly, football participation positively correlates with a higher likelihood of head injury. According to the NCAA, it’s not uncommon for many football players to suffer from a concussion several times during their career,
These repeated head injuries come with severe risks.
A common condition among football players is chronic traumatic encephalopathy, or CTE – a degenerative condition similar to Alzheimer’s caused by repeated head injury.
CTE can only be diagnosed by postmortem examination, and it was found that 76 out of 79 deceased NFL players inspected had CTE, according to PBS Frontline.
Concussions aren’t even required, necessarily, for student athletes to walk away with brain damage. A study published in scientific journal PLOS ONE found blood-brain barrier disruption is likely to occur after blunt impacts to the skull even of the athlete has not sustained a concussion.
Because competitive players are often subjected to extreme pressure and standards, competitors often head back into the next game, regardless of whether or not they have fully recovered. Once they are injured again, it can lead to second impact syndrome — a condition capable of causing death within two to five minutes in extreme cases, though this is admittedly far more rare than its typical result of merely significantly aggravating the original injury.
Basic morality and human empathy aside for those involved with what could be not inaccurately referred to as a generator for brain damage, football is also it extremely expensive: excessively so.
The Stanford Cardinals had a total operating expense of $75.1 million in 2008 according to ESPN. The UCLA Bruins had a total operating cost of $66 million in 2008, with $1 million more in the coach’s paycheck than the players’ tuition.
The cost of De Anza College’s football team are not publicly available.
That an institution of learning’s primary purpose is learning is self evident.
We may only hope that the ethics of banning football are just as clear.