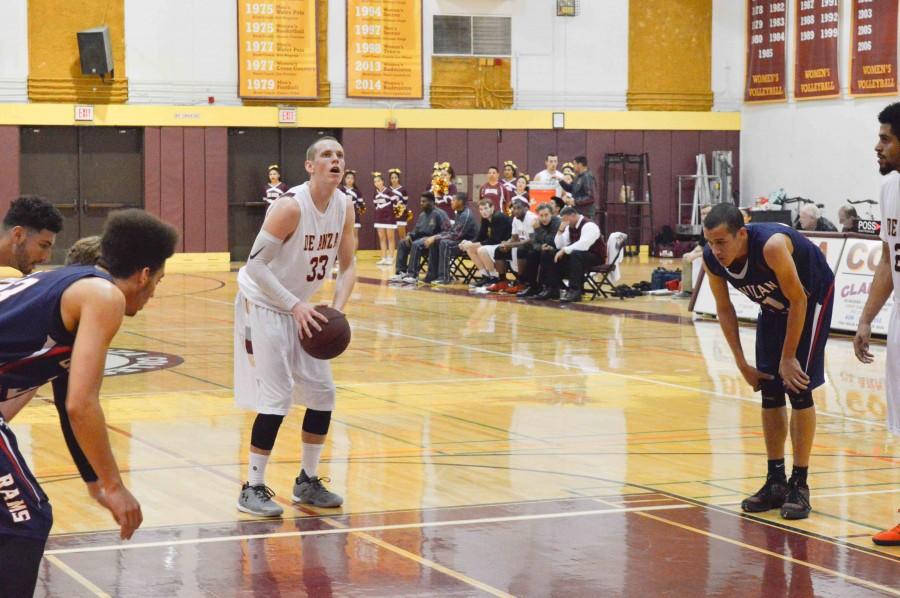 Cooper Wilson (33), wing, sets for a free throw in a game against Gavilan College that came down to the wire on Friday, Jan. 15.

De Anza men’s basketball rallies after getting into early foul trouble to earn their first home win of the season with a 70-68 win over the Gavilan College Rams on Friday, Jan. 15.

An unheralded hero carried the Dons to its first home victory on Friday night. Freshman guard Jeremy Ishimaru came off the bench for the Dons scoring a team-high 20 points, while also accounting for four steals.

“I started off well, and played good defense, which really got my motor going,” said Ishimaru of his performance that night.

Ishimaru’s big performance came as no surprise to head coach Jason Damjanovic. Jeremy scored 19 points against Sequoia early in the season, he said.

With a win at home under their belt, the Dons improve their record to 5-12 and 2-2 in the conference. The win also hands the Gavilan Rams their ninth straight loss, dropping them to a 3-13 record.

“We got a home win,” said Damjanovic after the victory. “We got three of the next four coming up at home, so it builds a little momentum.”

Not all went well for the Dons that night, as they earned five fouls within the first five  minutes of the game, forcing De Anza to take a timeout. During the timeout, Damjanovic gave an impassioned speech to his team.

“They needed to realize that I didn’t feel their effort was what it should be,” Damjanovic said.

In came Jeremy Ishimaru. At 5-foot-8-inches tall, he drove his way to the rim time and time again.

With Gavilan’s attention on Jeremy, other De Anza players were able to find openings to score. Starting post Karl Mann was able to get a couple hard earned and-one layups, and ended the night with a total of 11 points.

As the clock wound down in the first half, Steven Garverick, who plays in the post for the Dons, put back a shot while fading away as the buzzer went off, earning two of his 10 points right before the half.

De Anza would go into the half leading Gavilan 35-27. They also had 12 fouls compared to the Rams six at the midway point.

“We weren’t moving our feet,” said team captain Cooper Wilson of the early foul problems. “We were slapping them a lot, and we weren’t into defense.”

To begin the second Damjanovic opted for a different lineup from the original starters, one that included Ishimaru.

A different lineup isn’t something Damjanovic likes to do, but said he liked the energy from that group on the court at the end of the first half.

Ishimaru picked up right where he left off, forcing two turnovers and earning fast break points. At one point pushing the Dons lead over the Rams to 12 points.

The Rams would not go away quietly, making a couple of much needed shots from the three-point mark. Slowly climbing back from their 12-point deficit.

However, the Rams had no answer for Ishimaru, giving them no choice but to foul him whenever he had the ball.

Gavilan shortened the Don’s lead to two points as the buzzer sounded at the end of regulation, sealing a De Anza victory.

With Ishimaru in the lineup De Anza moved at a different pace and actively played defense, Wilson said. Adding that Ishimaru was the spark the team needed.