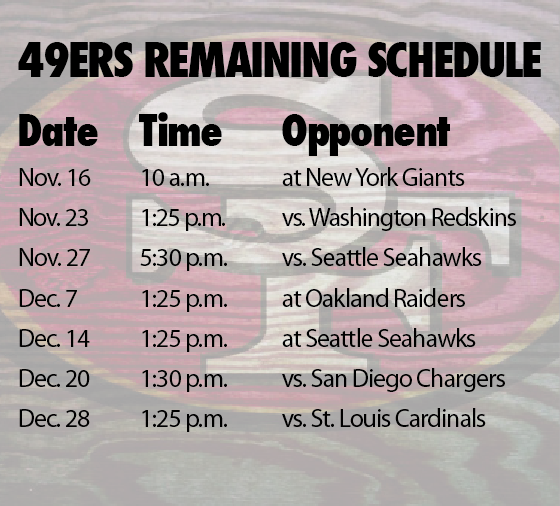 To say the first half of the season has been turbulent for the San Francisco 49ers would be a vast understatement.

With Ray Mcdonald’s arrest on suspicion of domestic violence, the suspension of defensive tackle Aldon Smith, and various reports of locker room unrest, the Niners have already equaled their loss total of last season.

The good news is they have managed a 4-4 record, as of Friday, with an injury-depleted defense and a virtually non-existent offense, and are in a position where the division title or a wild card spot are not far-fetched goals.

While many have put the blame on the shoulders of quarterback Colin Kaepernick and head coach Jim Harbaugh for the rough start, the team is suffering from a lack of identity on offense.

General manager Trent Baalke brought in wide receivers Stevie Johnson and Brandon Lloyd and drafted running back Carlos Hyde in the offseason to add weapons to an offense that was stagnant at times last year. The trouble is, offensive coordinator Greg Roman doesn’t quite know how to utilize them in an offense that meshes Kaepernick’s mobile ability with the power running style of Frank Gore.

This play-calling confusion has led to an offense that ranks 19th in total yards per game, last in red zone offense, tied for 24th in points scored and given up the third most sacks−27, as of Friday.

The most startling of these rankings is the Niners’ red zone touchdown efficiency. Through Week 9, the Niners had scored a touchdown on only 40 percent of their trips to the red zone.

Roman is solely to blame for this because it is his job to put players in a situation where they are most likely to succeed, and he has failed to do this on multiple occasions.

No scenario exemplified the 49er offensive woes better than the Week 9 game against the St. Louis Rams.

Down by three with 42 seconds left in the game, the Niners had first and goal from the 2-yard line. Roman called a short-out right to wide receiver Michael Crabtree that was completed just short of the goal, then a play-action roll out to the right for Kaepernick which he had to throw away, and finally a QB sneak which Kaepernick fumbled before crossing the goal line to end the game with a 13-10 loss.

Why Roman declined to give the ball to Gore in this scenario is beyond me. Gore was averaging 3.5 yards in the game and there is no better running back in the league at finding a gap and falling forward for at least two yards.

Gore might not have scored on the play, but the fact that he was not given a chance is baffling.

With all the new offensive pieces the Niners acquired in the offseason, Roman has changed the playbook to center on a passing attack rather than adding the new pieces to a playbook that already had success.

The run-heavy offense featuring Gore was stagnant at times during the past three seasons, but the only thing missing from that offense was a deep threat. The Niners have deep threats in Johnson and Lloyd and the quarterback to throw those deep passes in Kaepernick.

The offensive playbook needed to be tweaked, not rewritten. It is plainly obvious that Kaepernick is not a pocket passer, so putting the ball in the hands of Gore and Hyde to jumpstart the offense is the best course of action.

With three division games out of six games remaining, the Niners are still in the driver’s seat for a playoff spot, but they can’t afford another bad loss like the one to the Rams.

The Niners have the offensive tools to find the offensive success they have had the past three season, they just need to find a way to utilize the pieces properly.

Despite all the turmoil, Gore is not hitting the panic button on this season, so you shouldn’t either.

“We’re going to the playoffs,” Gore told CSN Bay Area. “We have great coaches. We have great guys. The last three years, we’ve been spoiled. Once everybody takes care of their jobs, we have a great shot.” 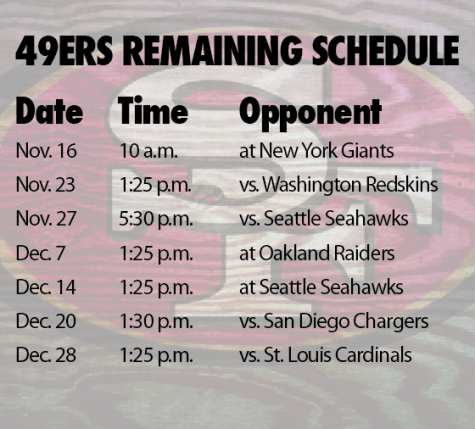