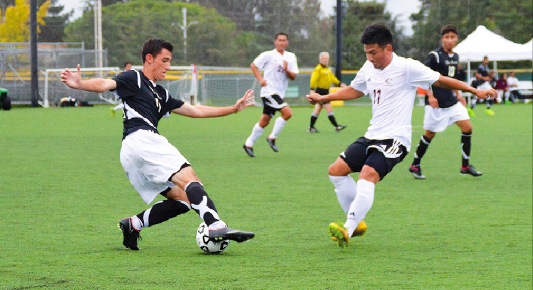 Despite the low score, the Dons  controlled the game in the midfield and played rock-solid defense in their win at home.

“I thought we played well,” said leading scorer and sophomore co-captain Rajaee Delane. “The team is coming along at the right time before the playoffs, but we can still fix our play to become more effective.”

As the first half went on, the Dons created many chances with their fluid passing against a packed Monterey defense, and held the opposing team’s chances to near zero.  De Anza was patient against a counter attacking strategy that has been used against the Dons in previous games.

Just before halftime of a goalless game, sophomore forward Kapanga Mchombo opened the scoring for the Dons.  He was able to capitalize off of a cross from Ahmed Mohammed, which deflected off of a defender and fell neatly to Mchombo who tapped it in to give the Dons
a 1-0 advantage.

“We will continue to focus on being able to solve different tactics,” said head coach Rusty Johnson. “We need to adapt to situations teams present to be best prepared for the playoffs.”

Monterey created its best chance of the game in the 51st minute when Joseph Cairel burst down the right side and blazed a shot just
wide right.

Defenders Jack Johnson and Anthony Shinjo were instrumental in the back, limiting Monterey’s opportunities throughout the game while the midfield was patient and let the game come to them.

“Roberto Mendoza and Dan Galvan did an exceptional job of moving the ball,” Johnson said. “We are seeing a counter attacking strategy more and more, so it’s important to handle it as well as we did today”.

As the game wound down, there were a few half chances until the 83rd minute when Jose Avalos crossed to Roy Ortiz who volleyed the ball toward the net, but was blocked by a Monterey defender, who cleared it off the line.

This proved to be the final chance for the Dons as they held on for a 1-0 victory. The win brought their record to 16-1 overall and 9-1 in conference as of Friday.

The Dons’ last home game of the season is on Friday November 14 at 3 p.m. against Hartnell College.