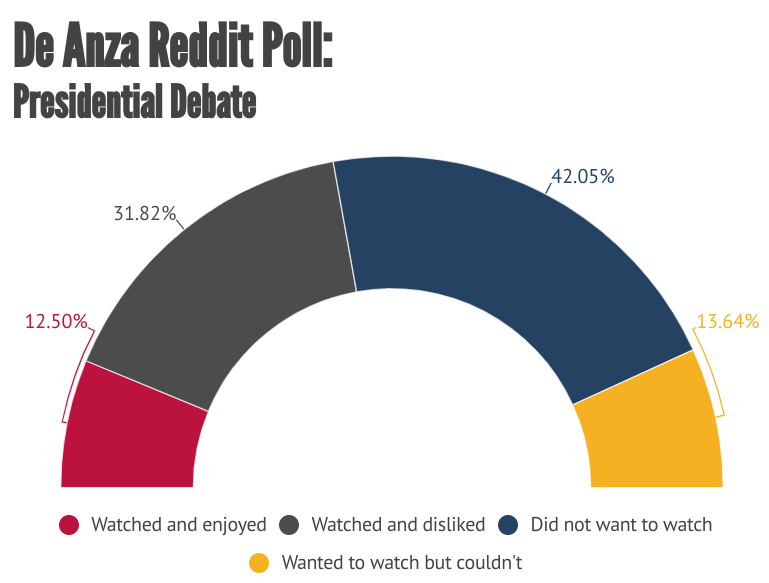 Around 42% of students respondents reported that they did not want to watch the last round of presidential debates, with only 12.5% of student watchers reporting they enjoyed the debate.

For the final round of presidential debates, a De Anza College Reddit community poll, conducted by La Voz, was taken gauging student interest and thoughts about the debate.

Out of 88 votes, 40% of respondents said they did not want to watch, and around 72% of those who watched felt it was a poor use of their time.

“I believe people are disinclined to tune-in to debates because you can get more value from reading accurate vetted information from independent sources that verify the claims touted, rather than initial reactions to a surface-level sound bite,” Back said. “I think a giant majority of the American public is not stupid enough to base their political opinion solely off of the words said during these prime time events, which have become more spectacle than informational the past four years.”

With the presidential election less than two weeks away, the third debate between President Donald Trump and former Vice President Joe Biden took place on Oct. 22 at Belmont University in Nashville, Tennessee.

NBC’s Kristen Welker served as moderator. The candidates were asked about a variety of topics including COVID-19, racism in America, international relations, climate change and healthcare.

Following negative feedback about the first debate, the second debate was cancelled because of President Trump’s positive COVID-19 diagnosis.

A virtual debate was suggested, but ultimately declined. Instead, each nominee held a town hall, which was met with disappointment from students.

“You can get up on any stage and tell your friends and family how you feel, but when your opponent’s friends and family are in the audience too, your conversation is different,” Sanderford said. “There are people who are undecided at this point still, and taking away that opportunity to hear both sides was very short sighted.”

In hopes of improving the quality of the debate for voters, the Commission for Presidential Debates made some changes for the final debate, including muting candidates’ microphones to avoid interruptions.

Students said they liked that change because it allowed for a more coherent conversation.

Despite these formatting changes, many De Anza students were unenthusiastic about the debate and chose not to tune in.