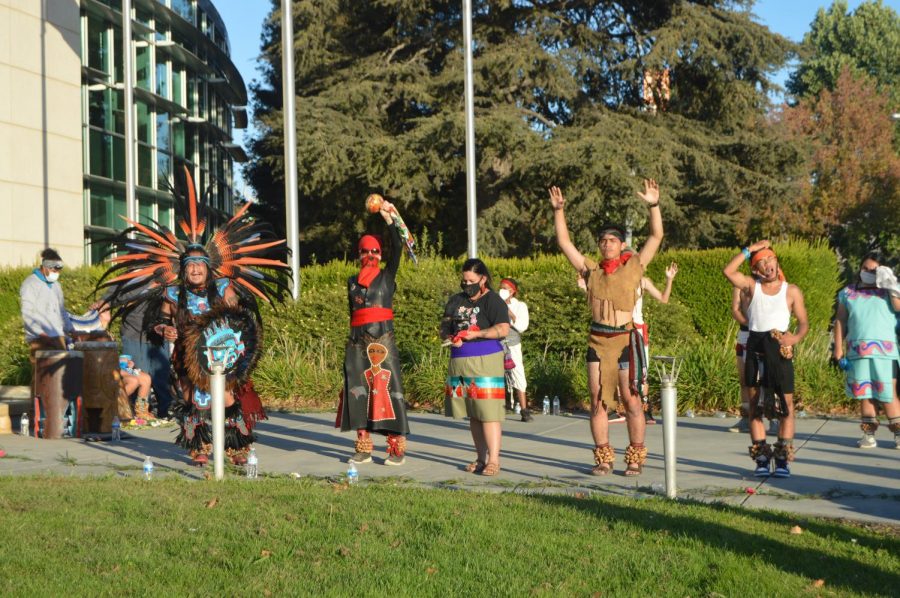 On Oct. 12, the Milpitas City Police Department cleared the way as Indigenous people and supporters marched down the streets of Milpitas to City Hall to participate in a peaceful protest against colonization and to celebrate their culture with traditional Indigenous music, dancing and attire.

As protesters made their way down the streets to City Hall, chants of “We resist, therefore we exist,” rang out from the crowd.

Around 50 people showed up to the march.

As protesters reached Milpitas City Hall, other organizers had constructed a staged area for supporters to gather around where speeches were given discussing the genocide, displacement and continued discrimination against Indigenous people as a result of colonization.

Participants talked specifically about what colonization has taken away from their culture, their land, and how their goals are to tell Indigenous people’s stories so that people truly know who they are, instead of what stereotypes they’ve been told.

“Personally, colonization has affected my life because no matter what I do, I get judged and called names like savage,” America Cihuapapilli Irieno, 15, Milpitas High School student, said, “That isn’t true or representative of any Native person, these words have been used to hide the reality of who we are and what we do.”

There were also discussions on the importance of needing to educate people on Indigenous issues.

Yesenia Avalos, 16, Overfelt High School student said, “Our lives were taken from us and it’s really important that we speak for other Indigeous people and fight on their behalf, we have to educate people on these issues.”

The protest was held in honor of Indigeous people’s lives, but many other people of color came to show support, citing their collective struggle against systematic oppression.

“We are learning that black and brown people have been suppressed and that we have been told lies through the history books,” Audrey CandyCorn, 39, radio host on 96.1, said. “We are spreading information and knowledge that people need to know about our history and about the current events and affairs happening in our country.”

She also said it is important to educate the future generations.

“It is our responsibility to stop pushing forward the lies,” CandyCorn said. “It’s important that children have honor and pride in who they are, and their traditions.”

Many who spoke stressed the importance of continuing to bring awareness to the wide range of socio-economic issues that people of color disproportionately face, as a result of systemic oppression.

“There are many things wrong in these cities that seem fine,” Tiny Garcia, 47, founder of “Poor” magazine, said, “There is a colonial statue of the minuteman who took over this indigenous territory right at Milpitas City hall, how does that even happen?”

”We need to do better and educate people,” Garcia said.