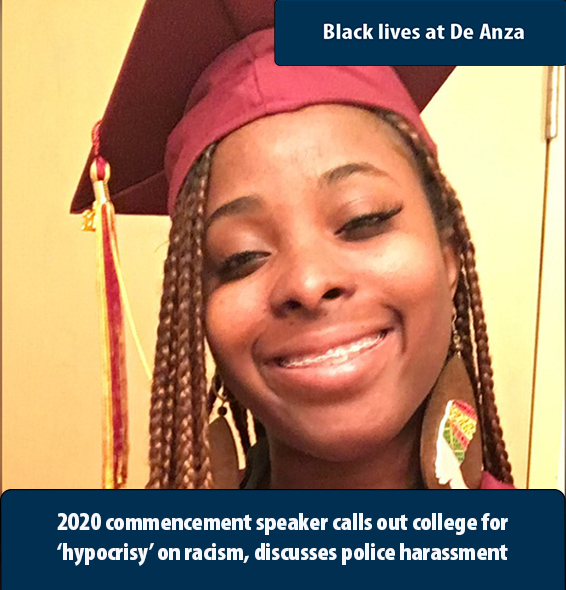 De Anza College’s commencement speaker for the 2020 graduation said she believes the statements about anti-racism from the college are insincere, as she recently recalled racist incidents towards her by FHDA police officers and a De Anza counselor.

Tamara Williams, 26, graduated from the De Anza College in June with two degrees, and worked full time throughout her five years at the college as a K-12 educator before being invited as the commencement speaker for De Anza College’s 2020 virtual graduation.

Around the same time, De Anza College made multiple official statements denouncing racism and committing the college to make an active effort to stand against it in the wake of George Floyd’s death.

When Williams saw the statements made by the college, she said her first reaction was that it was well written and sounded sincere, but it failed to match the actions taken by the institution.

“We don’t tolerate racism… and then in the same breath, I’m thinking to myself, ‘like you guys are hypocrites because I’ve dealt with racism on campus, from your police, from admin, from faculty,” said Williams.

For example, Williams said her relationship with FHDA police officers during her time as a student was wholly negative.

“Being a person that had interactions with the police over maybe three or four times in the five-year span that I was there, they have never been positive interactions and I was never doing anything wrong,” said Williams. “It was just them harassing me.”

In an incident in 2016, she said she and her then-boyfriend were detained for forty-five minutes to an hour on a curb.

“He opened the car door, he looked in the car with his flashlight, and we were just sitting there, said Williams. “He started taking stuff out of his car and throwing it on the ground.”

After asking multiple times what they had done wrong, they were finally told that the issue was a missing light above the license plate. When Williams asked twice for a badge number, she said the officer did not respond and instead told them to have a good night and drove off.

With no charges and no arrests, she attempted to file a complaint at the police station the next day.

Once in the station, she said she was redirected to an online portal which that was impossible to navigate.

“It just kept redirecting me places, like I couldn’t fill it out for a good 30 minutes,” she said.

On August 7, Daniel Acosta, FHDA police chief, sent Williams an email asking her to resubmit a complaint regarding the 2016 incident.

She said that she was told in a meeting with Acosta that he had also received complaints about the system and that they had finally fixed difficulties with filing this past March.

Williams said she felt the email asking her to resubmit her complaint was not addressing the larger issues she raised about how long the complaint process was not functional or difficult to navigate or how to heal the relationship between students and the police on campus.

“That’s crazy, I just read the email and that’s all it said. And that’s what I’m talking about,” said Williams. “‘Here’s a copy of a complaint form.’ What am I supposed to do with a complaint form?”

Acosta was not available to be reached in time for publishing.

Run-ins with campus police were not the only incidents of discrimination that Williams said she faced on the De Anza campus.

Because Williams was juggling school and a full-time job, she went to the counseling office for assistance with her classes and without asking or requesting assistance from a Black counselor, she was cut off and referred to another counselor.

“She’s like, ‘no, no, she would understand how to talk to you about these problems, she’s also African American and I’m going to give you her card,’” said Williams.

As an educator, she said she could not imagine what would happen to her if she told a student or parent she was unable to help them due to their race.

After giving a speech for De Anza’s Black graduation on June 19, Williams was chosen to give the commencement speech for the whole school by Interim President Christina Espinosa-Pieb.

Her 2020 commencement speech was about the importance of the accomplishment of all students during the pandemic, but also highlighted the importance of standing up and against racial inequality of all kinds and advocated an end to student homelessness.

Williams said that she believes the recent statements by the college are insincere and are the result of pressure to save face in the wake of the Black Lives Matter movement’s momentum.

Williams emphasized the importance of the college taking responsibility for the lack of change over the past years and not to use Black faculty as a panacea, such as President Lloyd Holmes and Pauline Wethington, De Anza college counselor.

She questioned the reasoning for the actions taken by the school including the hiring of the new President.

“I find it really ironic that De Anza decided to hire a Black gay man to be a president, which is great, very progressive,” said Williams. “But I feel like they did it all for the wrong reasons.”

Williams is working with a group of De Anza College students and staff as part of the recently formed Fund Foothill-De Anza Students Coalition which has mobilized to stop the filling of two FHDA police officer vacancies with the goal of reallocating the funds for student services.

“There are just so many things that need funding and I just feel like they always put the students on the back burner,” said Williams.

The Sankofa Scholarship, a $1,000  scholarship of which Williams was a recipient, is funded by the Black Faculty and Student Association network and is one of few scholarships dedicated to assisting Black students on campus.

“One thing I noticed is they don’t have a lot of scholarships for Black students,” said Williams. “They have a long list for other backgrounds. Which is great, good for them,  but it’s like, if I’m scraping to try to find a scholarship that fits for me, it’s hard.”

When Williams was in high school she used her school’s Black Student Union to assist her in paying for college application fees and she said that she would like to see something like that at De Anza.

“Just little things like that, you know, like, it’s just nice to have someone to reach out to it’s nice to have a safe place.”

De Anza College does not currently have an active Black Student Union, however, it was part of eight requests made by the BFSA.

She said she wonders if the recent hiring of Black faculty, as well as the sudden visibility of Black students, is to deflect from systemic issues that exist at the college.

“I think what you guys don’t realize is, even if you have all these Black people, all these people of color in power, it’s the institution that you need to change,” said Williams. “It doesn’t matter that you’re hiring a whole bunch of people that are of color, the institution within itself, the administration is what needs to change.”

Williams said she feels that all of the statements were made due to pressure from outside forces and not from a desire to change the atmosphere of the college.

“The only reason they did that is because people are asking questions,” said Williams. “How do you feel about Black Lives Matter? Have you ever said anything? They didn’t put that out just because they wanted to, they put it out because they’re being pressured to and they have to talk about it.”