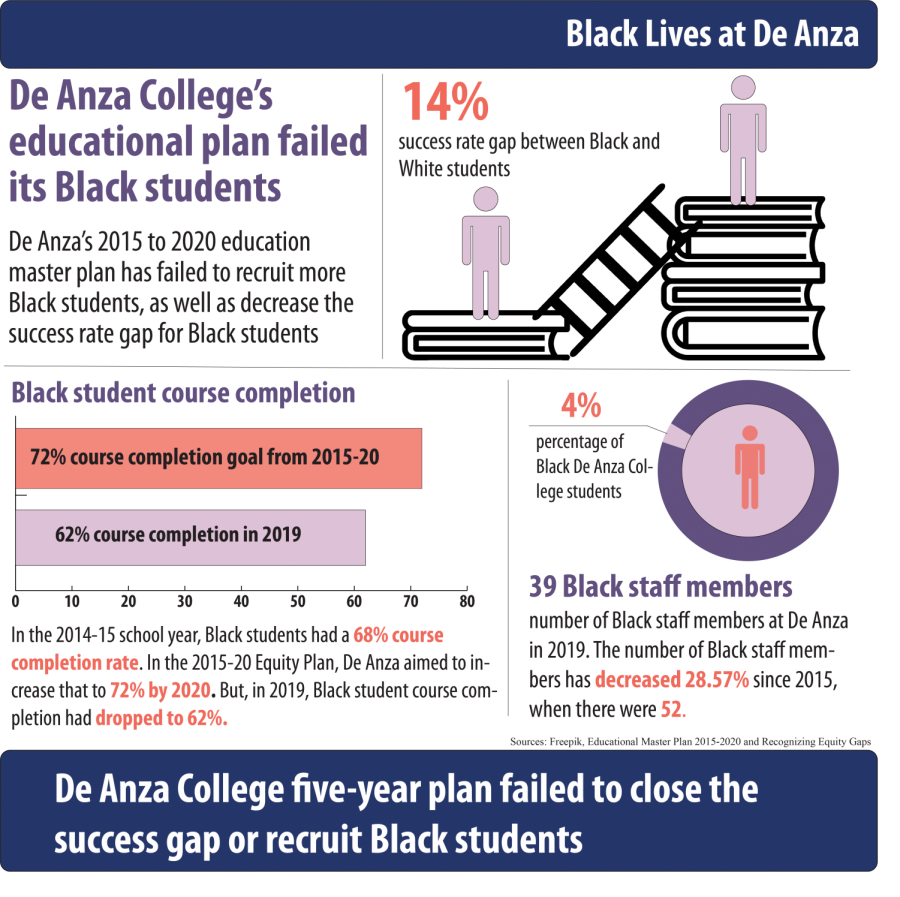 Five years later, De Anza College’s “Education masterplan 2015-2020” has failed in its aim to recruit Black students and decrease the success gap at the college.

Mallory Newell, supervisor of college research and chair of the college planning committee, said the plan aimed to prevent success rate gaps from exceeding 5% for targeted students, which includes Black students. Instead, it has grown based on current course completion rates between Black and white students.

Newell created the document “Recognizing Equity Gaps,” published on June 8, to show the disparity between student success rates on campus.

According to the original masterplan, which is updated yearly, “De Anza will continue to focus on enrollment growth for underserved students, targeting Latina/o, African American and Filipino populations, as well as South East Asian populations.”

But every update since the implementation of the plan included the sentence “The African American population remained stable at 4%.”

“Just because there is 4% doesn’t mean that there isn’t another 4% that wouldn’t want to come to community college if we made it more accessible to them,” said Newell.

New De Anza College President, Lloyd Holmes said that one way to address the issue is to listen and work with students.

“I think that oftentimes we come up with the solutions without engaging the people who are most affected,” Holmes said. “And then we put these things in place and we still see no change in the gap because we are not engaged in conversations with folks.”

An open letter to the De Anza College Academic Senate stated, “It is evident to anyone willing to look, that many of the structures on our campus are not diverse or inclusive.”

The open letter discussed at Academic Senate on June 22, was made in response to a request by the Black Faculty, Staff and Administrators Network’s “Eight Asks,” which includes a full-time tenure tracked Umoja counselor, a safe space for Black students, a Black Student Union, establishing a budget for all programs, and recruitment and leadership training for Black students and faculty.

Though the Umoja counselor is in the hiring process, the rest of the items have yet to be addressed.

The gap in Black student enrollment comes despite information showing that “84% of all Black undergraduates who go to college in California enroll in a California public college or university, with nearly three-quarters enrolling in community colleges,” according to the 2019 state of Black Californians report.

Sherrell Robinson, 23, nursing major and Umoja peer counselor, said that when the college claims to be what students need they should be asking whose needs they are attempting to meet.

“They even said African American students in this area or in the college system, they aren’t doing so good on test scores, transferring, all this stuff,” Robinson said. “Because the outside world is that much harder and then when you step into an academic setting, with little support, what do you expect?”

Though Holmes said he did not feel comfortable commenting about the previous steps that De Anza had taken, he does plan to address the equity gap.

“As I think about our Black students, if I don’t engage with them, we have missed the mark,” Holmes said.

One thing that is working, Robinson said, is Umoja and the Extended Opportunity Programs and Services.

“The environment they create, you go in there kind of lost but when you see everyone doing their thing,” she said. “You get caught up to speed really quick and the counselors let you know that like ‘we’re looking out for your best interest.’”

Newell also said that she has seen the greatest impact for Black students through AB 705, which puts students directly into transfer-level courses in math and English instead of having them test into remedial courses.

“We know for our students that life happens,” Newell said. “And so the quicker we can get them through, the less likely life is going to happen and it’s going to derail them.”

But Newell also said the impact overall for Black students, though positive, is still low compared to other student population groups.

“We’re not just about what I call ‘lip service,’ just talking about things,” Holmes said. “For us, it’s about how do we move beyond talk to action. That’s what’s important.”