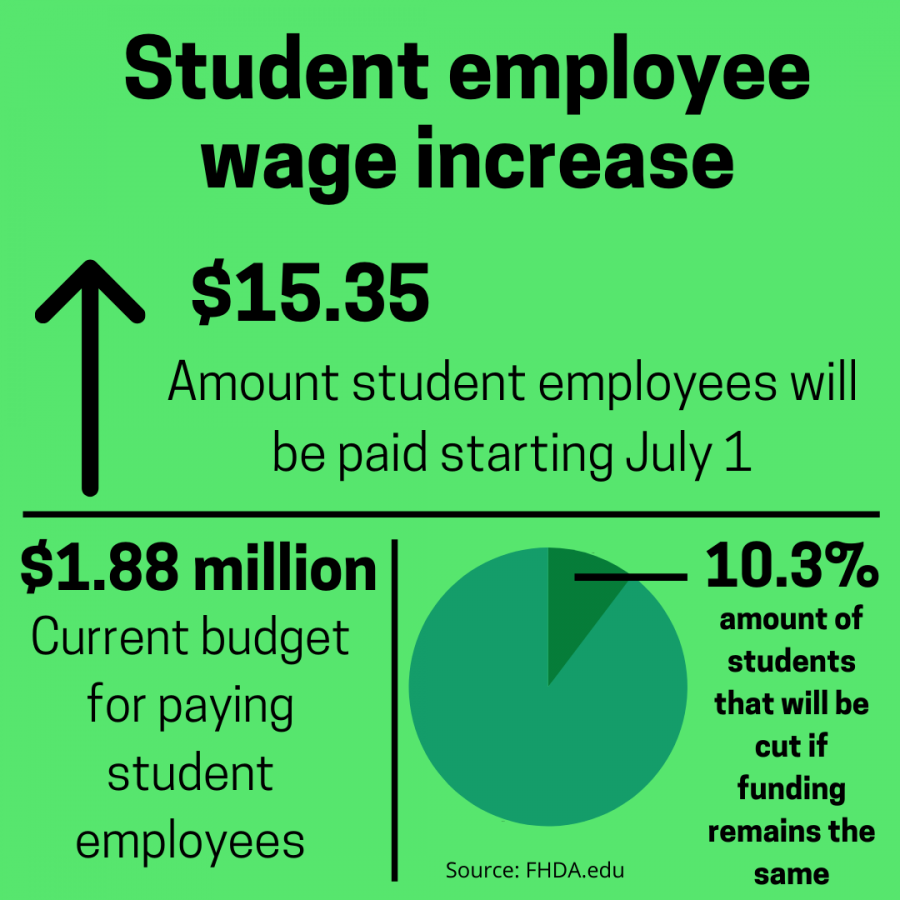 The Foothill De Anza Board of Trustees unanimously voted to raise student employee wage to $15.35 an hour and temporary employee wage to a minimum of $15, in response to the high cost of living in the Bay Area and growing financial concerns amid the COVID-19 pandemic.

Currently, student employees are being paid a minimum of $13, and temporary employees are paid based on their position. The increase comes in advance of California raising its statewide minimum wage to $15 and reflects Cupertino’s minimum wage of $15.35.

De Anza College currently has a budget of $1.88 million to employ its just over 800 student employees.

With the increase in student wage, the budget will increase by 11%, if De Anza continues to employ the same amount of students.

However, if the funding remains the same, it is estimated that De Anza will only employ 720 students, with a decrease in staff of over 10%

The board received 18 public comments prior to the meeting, all supporting the increase in wage, some requesting that the board review the wage annually and revise it based on the cost of living index.

Melissa Aguilar and Diana Alves De Lima, co-directors of the student success center, equity and engagement division, wrote a public comment, asking for the board to approve the higher wage to aid student employees in the Student Success Center.

“Our lower wages make it extremely difficult for us to recruit and retain qualified tutors, especially among low income and first-generation students who rely on their part-time employment to meet basic needs,” they wrote.

Eight members of the community, including students, spoke at the board meeting, all voicing support for the increase and an annual evaluation of wages to keep up with the cost of living.

Zoey Vulpy, environmental science major, works as an intern for the Vasconcellos Institute for Democracy in Action and advocated for the raise in wages to better financially support students.

“A lot of our students, myself and my family included, are at any time only a few weeks or a few months away from not being able to pay rent,” she said. “Raising the wage to Cupertino’s local minimum wage would ensure that our students not only have the opportunity to survive, but to flourish.”

The rise in wages is also supported by the DASB Senate and the Associated Students of Foothill College.

De Anza Student Body Senator Casey Cosgrove said that she knows students who struggle financially and that the raise would help to aid them and their families.

“I’ve had one friend who had to move three times within the last year and he’s currently sharing a two-bedroom apartment with his family, which is about seven people. He is only able to sleep in a closet,” she said. “It would not only benefit the students directly, but it could also benefit their families as well.”

“I think that without supporting a fair minimum wage of $15.35, which is the Cupertino minimum wage, a strive for equity is simply hollow,” Michael said.

Despite comments asking for the student minimum wage to reflect the cost of living index and the temporary employee wage to be $15.35, the board said it needs to further consider action due to collective bargaining laws.

In addition, the board agreed to review student and temporary employee wage annually.

The board is also uncertain of what its budget will be for this fall due to the financial effects of the COVID-19 pandemic.

The increase in student and temporary employee wages will take effect July 1.