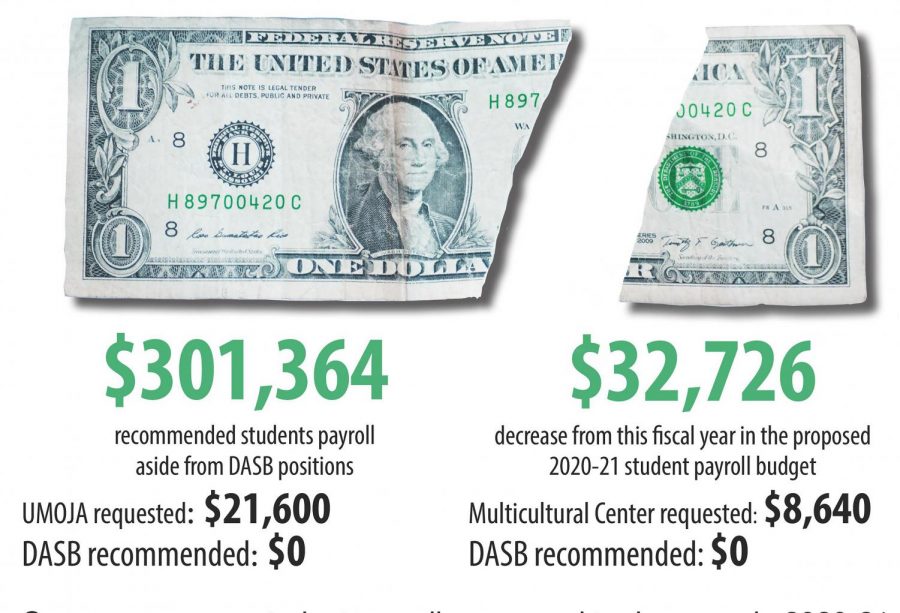 The budget cuts take into account student minimum wage being raised to $15 an hour in compliance with state minimum wage and DASB Senate’s ranking of the importance of the student positions to the programs themselves. This also includes the impact of the program on students on campus.

Programs that receive no funding have to hire students through financial aid through a federal work study program.

“A lot of students don’t take advantage of applying for financial aid,” said Jacqueline DiBernardo, student employment specialist. “Every year that students don’t apply for that, we lose funding (which) means that the department wouldn’t have any money.”

For this fiscal year, DASB student payroll’s budget is $69,000, and the proposed 2021 student payroll budget is around $79,000, which is around a $10,000 increase.
Student Success and Retention Center
Among those affected by the cuts are the Student Success and Retention Center, which provides academic resources to and supports students with historically low retention rates and first generation college students.

The Office of Outreach requested $21,600 to fund their student payroll budget for next year.

Senators said that they believe that funding the outreach programs should come from the college itself, and not from the student government.
Umoja Program
The Umoja Program’s budget, which focuses on black student’s success in pursuing higher education, was cut except for $5,000 for domestic conferences and travel expenses.

Per the memorandum of understanding with the state-level Umoja Community, they are unable to cut funding for those expenses.

“At least that part, now everything else is for the school to then choose how they feel best to assist with the program and the students in closing the equity gap,” said Claudia Barbosa counselor and coordinator of the Umoja program at De Anza.

The cut comes despite a request of $21,600 for student payroll by Umoja, which Barbosa said was important to help develop leadership and gain valuable work experience.

“Right now, in the rebuilding stages of the program, that is absolutely crucial,” Barbosa said.
Free computer program
The Computer Donation Program, which assisted over 12,000 students in obtaining free computers, had its student payroll cut entirely.

Joseph Lipsig, CompTechS Computer Lab Coordinator, had requested an increase in allocation for student payroll of close to $5,400 over their current operating budget; they got cut instead.

The budget for the program now consists of supplies only, which Lipsig said they absolutely need.

“There are a number of things we do here out of pocket,” said Lipsig.

Lipsig maintains that he is grateful for the funds he does get from DASB and let them know that at a recent meeting.

“Let’s just put it this way, they used to give me an amount budgeted to pay students and I’ve always tried to cut that budget almost in half,” said Lipsig.
Multicultural Center
The Multicultural Center’s student payroll budget was completely cut, with a budget of $4,000 for this fiscal year cut down to zero. It had requested $8,640 for the 2021 fiscal year.

The Multicultural Center is home to 22 instructional programs, including Native American studies, Asian studies, as well as languages such as American Sign Language and Hindi.