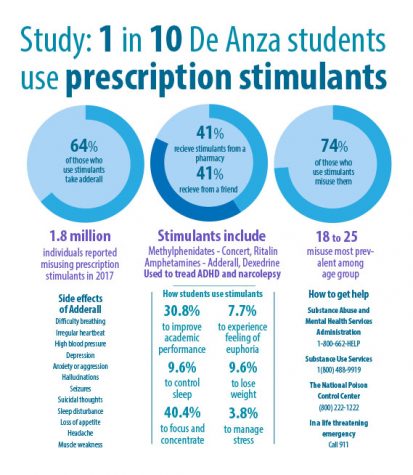 Daniel Ju, Annabel Koh, Peter Pham and Andrae Ladores conducted research and surveyed 308 students on campus on their use of prescription stimulants.

The results show that 31 students, or 10% surveyed, used prescription stimulants in the past year.

Prescription stimulants include amphetamines, including Adderall and methylphenidates, such as Ritalin and Concerta.

Adderall is prescribed to primarily treat ADHD and narcolepsy. It is a highly addictive drug and abuse may lead to severe psychological or physical dependence, according to the American Addiction Centers.

The effects of the drug include increased alertness, attention span, energy and feelings of euphoria.

Adderall has reportedly been illegally misused by college students to improve their academic performance and increase concentration according to Ju, head student researcher of the project.

There has been an increase in usage of Adderall and other prescription stimulants among students, according to Koh.

Ju said the main reason the group conducted the research was because this kind of study had not been done for a local community college.

“You do read a lot of statistics out there on the use and misuse of Adderall and other prescription stimulants, but most of those studies are centered around 4 year universities, which really have a different culture, different student population,” said Ju. “We were really curious what it would look like here at De Anza community college.

The research also yielded an unexpected use for amphetamines not misused for studying.

“One surprising thing in terms of why they used it was weight loss because we think of adderall as the drug for studying,” said Koh.

9.6% of the students surveyed stated they used prescription stimulants to lose weight.

Adderall can cause stomach issues if taken in high dosages, according to the research project, but is not an approved weight loss medication by the U.S. Food and Drug Administration.