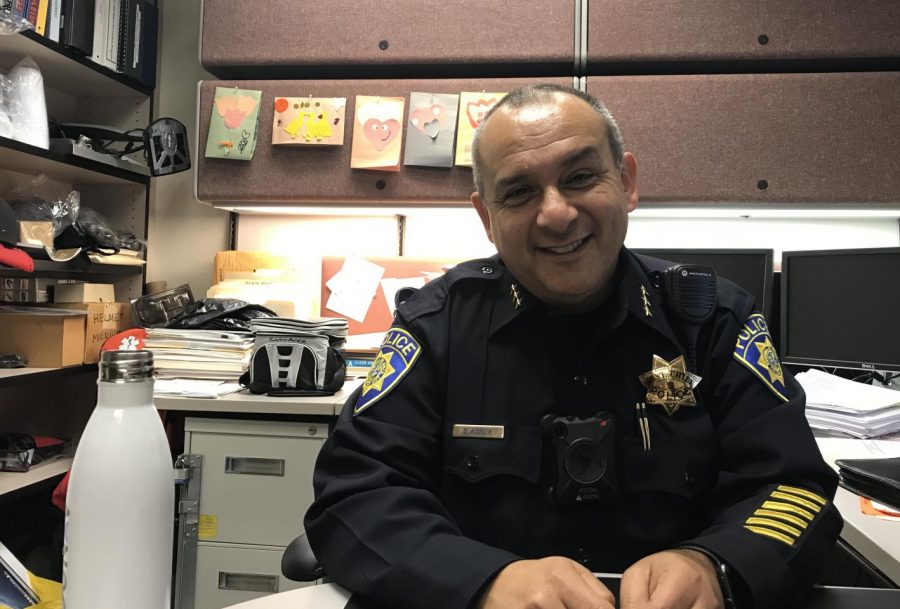 Son of immigrant parents, Daniel Acosta, newly appointed Chief of Police at Foothill-De Anza Community, hopes to build a better relationship between the police department and the community it serves.

Born in the Sacramento area in a town called Colusa, Acosta was raised in San Jose as the middle child of immigrant parents from Mexico.

He graduated from San Jose State University with a major in psychology and a minor in Mexican American studies.

Acosta became interested in police work out of sheer curiosity and thanks his family for being able to excel in his career as a police officer with their constant support and sacrifices.

“While I was working as an engineer, I thought I’d give this a shot, so I applied to the San Jose Police Department,” Acosta said.  “I was hired and 34 years later here, I am trying to figure out what to do with my life.”

Acosta, modest with his achievement, never thought about becoming a chief and said, “I’ve been very blessed in my career.”

Acosta has been working in the Foothill-De Anza district for four and a half years and has a deep connection with the community and its educational values.

“I have always been a strong proponent of education. A lot of the volunteer work I’ve done had an education component. It seemed only natural to come to a community college and continue that on a more personal level,” he said.

“One of my priorities is to form a chief advisory committee involving both campuses,” Acosta said. This would allow the police department to directly take comments, criticism, concerns and so much more.

Acosta has done countless hours of volunteer work to better the relationship with the community and the police department and hopes to increase such efforts.

Some of the events held by the police department so far is a know your rights forum where they brought in an immigration attorney for students and faculty to become informed and to know their rights, and coffee with a cop where people could have a conversation over coffee with a police officer.

Acosta holds community values at heart and hopes to hold much more similar events in the future, he said.