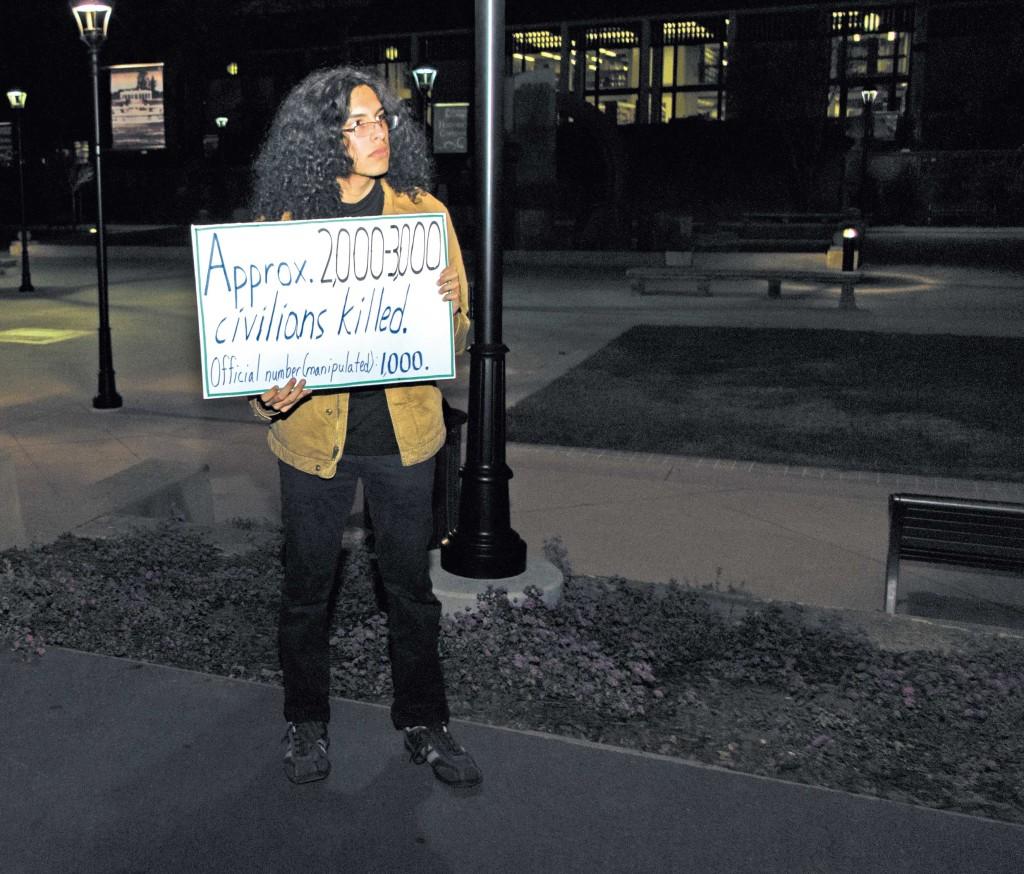 Students for Justice club member Steven Alvarado holds up a sign detailing the number of civilian drone strike casualties in protest of former Secretary of Defense Leon Panetta, who spoke at the Flint Center at De Anza College, Feb. 20.

The student activists used a variety of tactics to spread their message to speech goers.

Brennan Robins, a club member and event organizer, approached attendees as they entered the building and attempted to begin a dialogue.

Nate Greensides, the club treasurer, walked up and down the walkway in front of the Flint center shouting his message.

He tried to make the point more relevant to the audience.

“It could be in our own backyard,” Greensides shouted. “He has that power.”

But Panetta is retired and does not have the authority anymore, a woman on her way in pointed out.

After a quick check on his cellphone, Greensides amended his talking points.

According to an NBC segment, the four Americans killed by drones were Al Qaeda militants. One was the target of a drone strike, the others were collateral.

Many attendees walked past the table without stopping, while others commented they already knew about drone strikes and supported their use.

Others came over to the table to ask for more information about drone strikes and why the students oppose them.

“If Panetta presents anything about drones at all, it will be a positive view,” Robins said. “We’re trying to present the negative view so that people can have a fair and balanced interpretation.”

Drones were a significant portion of his speech, an attendee said.

Students for Justice members believe drone strikes are immoral and illegal, according to Robins.

Another goal was to educate people about drone strikes in general.

“Most of them don’t know that much about it,” Robins said.

Even though Panetta is retired, Students for Justice said the speech was an effective place to protest.

“It’s to raise awareness generally,” Robins said. “Even though he’s retired he’s pretty much constantly being quoted in the media.”

Students for Justice has not scheduled any follow-up protests, but club members had a clear idea of what they wanted people to do after visiting the table.

“We’re hoping that this starts a dialogue or discussion about drone strikes which has been missing from the media and public discourse,” Robins said.

Xitlalli said the purpose of the protest was not to debate with people who supported drones. The purpose was to begin conversation between people with different views.