MLK Impersonator gives “I Have A Dream Speech”2 min read 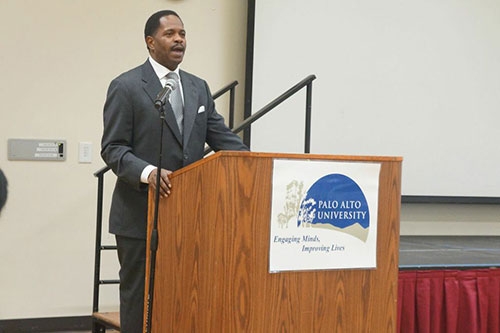 This past Wednesday, January 15th, Palo Alto University hosted a breakfast in honor of receiving the HEED Award for a second year in a row. Congratulations!

In honor of the late Dr. Martin Luther King Jr.’s birthday, they had guest speaker Stephon Ferguson join them.

Mr. Ferguson is a Dr. King impersonator who gives motivational speeches in the spirit of the late MLK. He has been doing this for 12 years; and prior to this, he work as a deejay at a radio station in his hometown Albany, New York.

On this occasion, Mr. Ferguson entertained the people in attendance with a moving rendition of Dr. King’s famous speech, “I Have A Dream.”

Another popular opinion among the attendees was how much relevant the “I Have A Dream” speech is today in light of current issues such as the Ferguson case and Treyvon Martin case.

Frosan Bäggins said, “I felt like the ‘I Have a Dream’ speech continues to hold value even decades later… Having the speech delivered to us was an empowering experience.”

At the end of his speech, Mr. Ferguson gave the attendees an opportunity to ask him questions and he answered them in the spirit of Dr. King.

Many of the students in attendance coincided in this being their favorite part of the event.

Mously Diakate said, “I always thought, one day I would love to sit down with Dr. King and ask him a question. So this was my opportunity, probably my only opportunity.”

Other students took the opportunity as well and asked Dr. King what he thought about resorting to violence, and how far society has come since he was alive.

He responded, “ We have come a long way. I look around this room and see so much diversity, something we would not have seen in the 1950s. But we still have a long way to go.”

If Dr. King was alive today, what would you ask him?