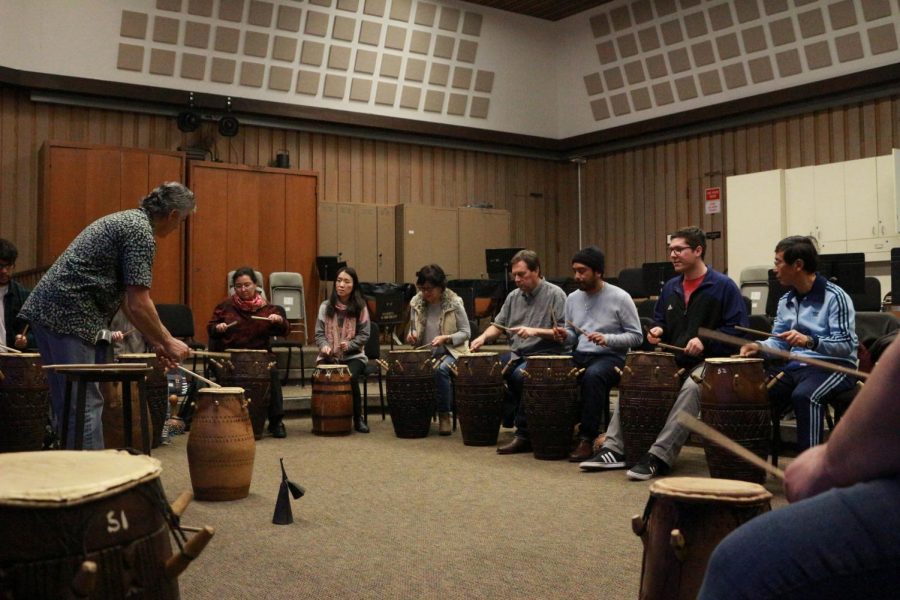 There is only one more chance to join in on Music Instructor Ron Dunn’s free West African drumming workshop.

The workshop, which is held in A-31, provides a summary of Dunn’s now-canceled beginning to intermediate African percussion course.

Dunn said the course used to be offered at De Anza as an accredited class, but approximately six years ago they lost the enrollment numbers necessary to keep it going.

“We decided to stop offering it, it’s not that the administration forced us to cut it,” said Dunn.

“We are aiming to get it back in the schedule in some capacity,” Dunn said. “Meanwhile, I’ll offer the workshop at least twice, possibly three times a quarter.”

Fifteen students attended the workshop on the second of three events on Feb. 20.

“We had about high 20’s last time. A bunch of people came,” Dunn said.

Two of the most popular instruments available at the workshop were the “Kpanlogo” drums, which originate from Ghana, West Africa.

Other instruments that were available were congas and “axatse,” a handheld instrument similar to a maraca made out of a hollowed-out calabash gourd, also originating from Ghana.

For Dunn, understanding the cultural roots is part of appreciating the music.

“For the person that doesn’t know it, hearing the layering of rhythms and starting to learn to participate in even a simple rhythm, and hearing the interplay of rhythms from one another is just so valuable,” said Dunn.

Some of the students were familiar with each other, making chit-chat before the workshop began, others who had stumbled upon the workshop for the first time were more subdued as the workshop started.

However, by the end of the workshop, many participants had wide grins as they got to know the instruments by playing simple drum beats.

Mario Rosas, 24, music major, said, “I really enjoyed it; it was pretty interesting and I learned some stuff I didn’t know.”

No experience with drumming, or music in general, is required to attend this workshop.

“Everyone is having fun for sure,” said Sanjan Maharjan, 28, music major, “Overall this workshop was very helpful.”

Dunn said, “It’s an opportunity for students to meet other students interested in growing their rhythmic skills and an appreciation for this really important music.”