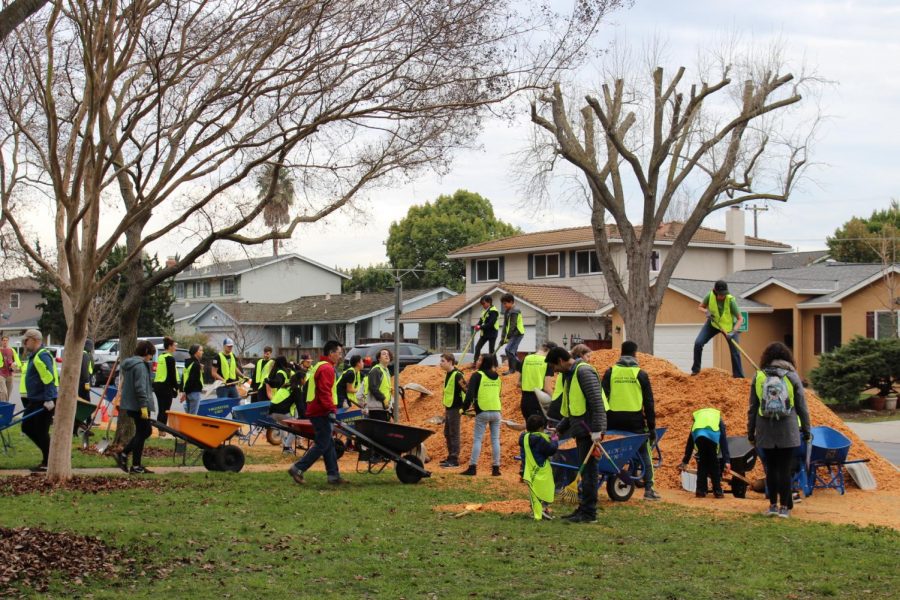 Volunteers use wheelbarrows to pick up the safety surfacing fibar.

On Jan. 20, the cities of San Jose and Campbell came together at Marijane Hamann Park, which straddles the two cities, to commit to a day of service and beautify the park in honor of Martin Luther King Jr.’s legacy.

About 70 volunteers painted over graffiti, filled playgrounds with Fibar, raked leaves, and landscaped the park.

The city of Campbell’s park supervisor, Vince Huppe worked with the community and said he enjoyed seeing the amount of spirit they brought to this event.

“The community identifies with events like this and it also gives the citizens a chance to help out the city,” Huppe said.

A local salesman, Simon Read, came with his son after hearing about it through Monroe Middle School, situated just a block away from the park.

Read said he was inspired by the variety of people that attended this event, including many families as well as high school students who volunteered in order to receive community service hours.

“Parks tend to be people’s backyards, so to have a space that is so inviting for them to come to is really perfect,” Read said.

Companies also sent workgroups to give back to the park to aid in the beautification of the park.

Shayla Bannert, who works for Advantis Global, volunteered for the event as part of their San Jose team’s “Day of Service” activities.

“We typically try to do a community service event every quarter,” Bannert said.

Todd Capurso, Campbell’s Public Works Director, was one of the people associated with the creation of this annual event.

“It’s the one time of year where we actually ignore city boundaries”, Capurso said. “We ignore who works for who, and we all come out here to work together.”

Mollie Tobias, City of San José Program Manager for Parks, Recreation and Neighborhood Services has helped aid volunteers for the past five years since the program’s inception.

Tobias said the projects improve what the park staff are already doing, but with limited staff.

“We just don’t have enough park staff to keep the parks in the condition we would like them to be in.”