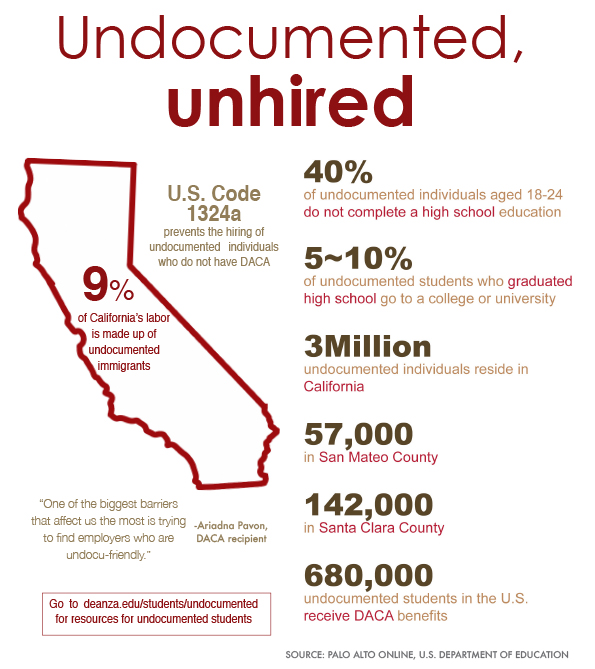 Over a thousand students without Deferred Action for Childhood Arrival cannot get jobs on campus at De Anza College, due to state and federal regulations that prevent employers from hiring employees without documentation.

U.S. Code 1324a, one of the regulations, prevents the hiring of persons who do not have current authorization.

“One of the biggest barriers that affect us the most is trying to find employers who are undocu-friendly,” said Ariadna Pavon, 21, biology and pre-med major, and a current DACA recipient.

Students do not need to disclose their status to an employer when applying, said Esquivel.

Having current DACA status does allow students to be legally employed in the United States. However, even with current DACA paperwork, some employers do not understand what DACA is and how it works.

“You have to explain DACA, what it is for and who it is for,” said Pavon.

The pressure to renew and maintain DACA status, which must be renewed every two years per federal regulation, puts more stress on students.

“You are always kind of on your toes on whether or not they are going to renew it,” said Pavon.

There are legal assistance programs in the area that can assist students in renewing their DACA paperwork such as Services Immigrant Rights Education Network located in Fresno.

With federal regulations preventing people without DACA from accessing work in the public sector, undocumented students are disproportionally left with pursuing positions in poorly regulated industries that may engage in activities like wage-theft and unsafe working environments according to the Migrant Workers and Their Occupational Health and Safety from the Annual Review of Public Health.

“There needs to be change in policies, locally and at the state level to allow colleges to hire undocumented students,” said Esquivel.

Not all students are aware that being undocumented without DACA bars students from being formally hired by the school.

“It doesn’t make sense,” she said. “If they are allowed to study, they should also be allowed to work here,” said Sara Rour, 23, nursing major.

Though De Anza cannot knowingly hire students who do not have authorization to work in the United States, De Anza is looking for ways to provide students without documentation professional experience through fellowships modeled after the efforts of other colleges.

“Undocuhustle,” an event that was held Oct. 16, encouraged students who are undocumented to find other methods of becoming entrepreneurs in their field.

De Anza is also looking for ways to create fellowships for undocumented students, where they would not necessarily be able to work on campus, but would be able to apply their own skills as an independent contractor on campus.

“It’s so new and it’s a long process,” Esquivel said. “We requested those [speakers] to say that students can do individual work.”

For undocumented adults that want to work as faculty or staff, people need to “push for a change in federal policy,” said Esquivel.

Even with the current efforts by the Office of Equity and HEFAS to include undocumented students in all activities and to create a welcoming environment, there are some regulations that De Anza is bound to when it comes to students who do not have current visas or DACA paperwork.

“Unfortunately, even at De Anza they don’t have employment authorization,” said Pavon.

As it stands, public funding creates an obstacle for the school to create an opportunity for undocumented students.

“In a college that’s publicly funded, it’s very limited what situations can be made for undocumented students,” said Esquivel.

Regardless of the legal restrictions, De Anza’s HEFAS aims to be a place where all feel welcomed.

“Hands down, they are amazing because they help students,” said Pavon.