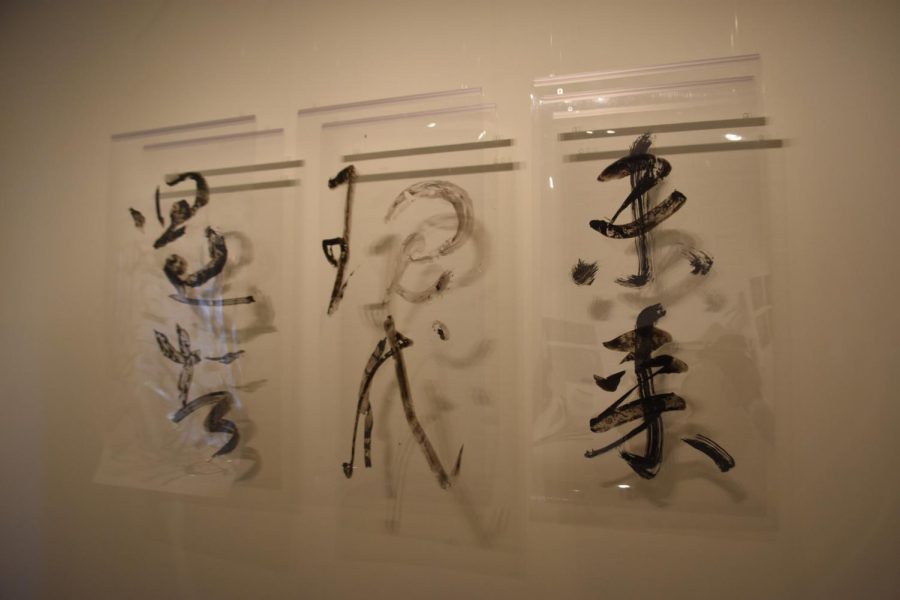 Japanese Calligraphy on Mylar by Tamiko and Midori Kono Thiel

The Euphrat Art Museum is hosting a new exhibit called Space and Place, which will be open from Oct. 23 through Dec. 5. The exhibit is set to focus on space and the cultures surrounding it.

“Space and Places explores multicultural interpretations of outer space, hidden layers of culture and history, in public spaces, and issues about space and equity,” said Diana Argabrite, the program coordinator.

Dia de los Muertos is a Mexican holiday, where deceased loved ones are celebrated and prayed for in their spiritual journey. Altars are used for commemorating the dead, and pictures of the loved ones, along with food and candles are placed on them.

The colors of the altar resemble the sky, ocean and earth, encompassing each place where a loved one could have passed. On Nov 2, MEChA will host a small celebration with food and personal storytelling, where the altar is open for students and faculty to leave offerings.
Japanese Calligraphy on Mylar
Traditional Japanese calligraphy, mixed with augmented reality done by Tamiko and Midori Kono Thiel, is displayed in the exhibit.

Tamiko Thiel is an augmented reality artist and is using her mother’s calligraphy to make an exhibit that is interactive and explores the interplay of place, space, and the body and cultural identity of the Japanese calligraphy.

Midori Kono Thiel is a master calligrapher who has won many prizes for her work, and in this exhibit, she is experimenting with different mediums such as mylar instead of traditional paper that Japanese calligraphy is done on.

Midori Kono Thiel explored with the effects of the ink on mylar, by using paper towels to create a spiraling effect on the calligraphy or made puddles in the ink to create a darker effect.

Tamiko Thiel said that all these experiments made the details of her mother’s calligraphy look like the spiral galaxies or the subatomic particles colliding with each other.