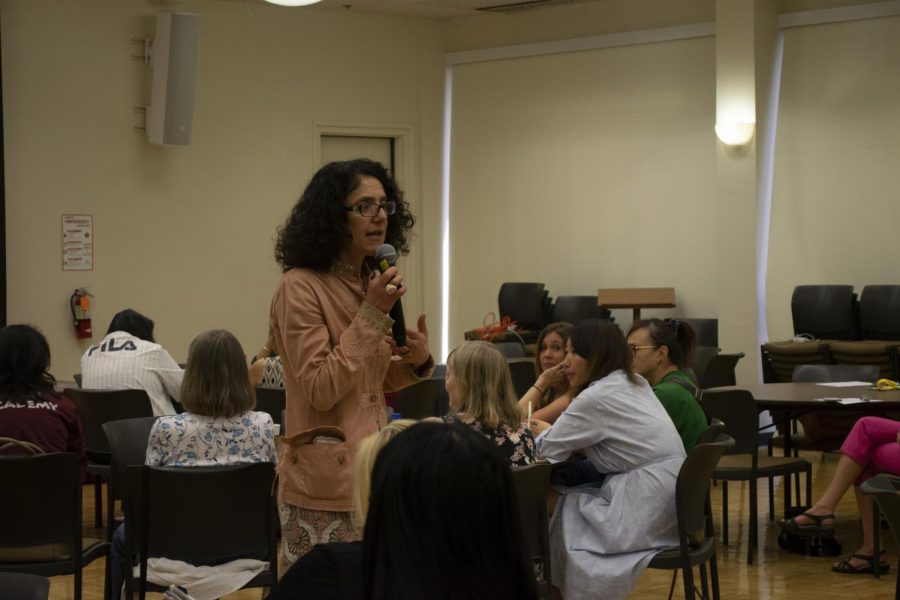 Julie Kurtz speaks at De Anza College on June 5. She highlighted the need for more trauma-informed activities in the workforce and everyday life.

Special guest Julie Kurtz, co-director of Trauma-Informed Practices, held a conference at  De Anza College discussing the correlation of traumatic events and the effects they have, not only on a person’s everyday life but also on children in early education.

“Trauma is defined by the individual’s sensory system, not the event itself,” Kurtz said.

According to Kurtz, in order to recognize trauma as an issue, it has to have long term adverse effects on you emotionally, spiritually, physically or mentally, into adulthood, in one or more of those areas.

Kurtz explained that each part is responsible for the brain’s decisions and actions.

Kurtz said the emotional backlash trauma carries causes strain whether we recognize it or not, even in our own personal lives.

With a majority of the active audience being in child development related courses and majors, Kurtz gave effective tips and explained situations to notice when an individual needs traumatic informed practices.

“Speak with soft tones to the children. Tell them everything will be OK when they misbehave because we want to tell the reptile brain to calm down and translate to the mammal brain that everything is okay,” Kurtz said.

Kurtz said child educators should distinguish the past from the present with words like, “You are with me now,” to reassure them they are not in a traumatizing encounterment.

Kurtz described how a traumatic event during a car ride with her father is triggered when she finds herself in a relatable situation.

Kurtz said she had shouted, “Don’t hit me!” at her husband as they were driving down the street.

Kurtz said she realized the situations she experienced at home as a child, on the streets or at school trigger different parts of the brain as it translates reactions.

Kurtz said that knowledge on trauma care is more important to one’s career than most think.

“Being trained on trauma-informed care is the only way you are going to get a job and keep a job,” said Child Advocates Chief Executive Officer Fredrick Ferrer.

“Just how you train for your curriculum for child development, knowledge of trauma care is really state of the art. This is something you need to have at any job, teaching any age group.” Ferrer said.

Training in trauma care practices will be coming to De Anza very soon thanks to community member sponsorships and funding.

Mayra Cruz, instructor of the child-development and education department, said increasing awareness and understanding trauma-informed strategies will be the main goal.