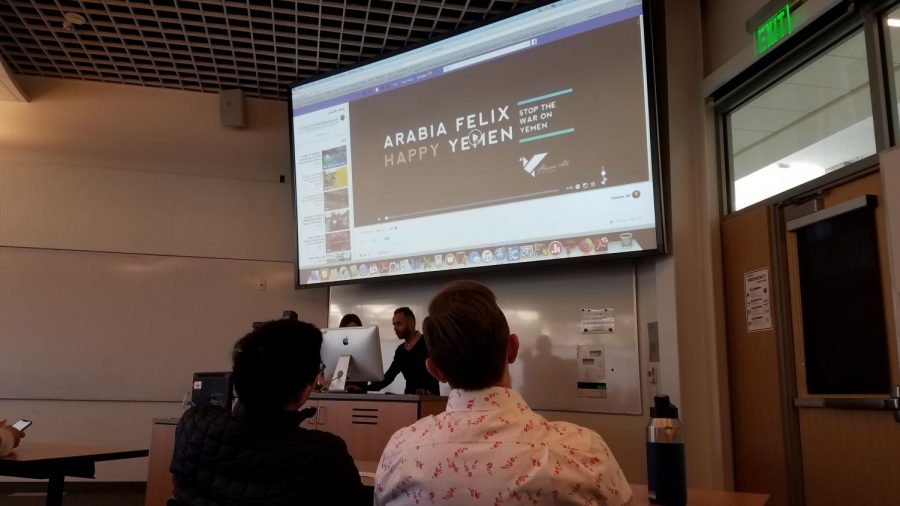 Students watch a presentation on the war in Yemen in MLC 112 on Thursday, March 14.

Ali Almaznaei calls his family every day, just to hear their voices, to make sure they are still alive. They are stuck in Yemen while he is here, educating people on what is considered the worst humanitarian crisis in the world, and advocating for an end to the civil war in Yemen.

Almaznaei was one of two speakers at Yemen: Inform Yourself, an event held in the Media and Learning Center on March 14. Students at the event learned about the history of the civil war in Yemen, the disastrous effects of the war, and what they can do to advocate to end it.

Peace Action Development Associate Lilly Dragnev, the second speaker at the event, made this last point a focus of her presentation. She gave students telephone numbers to call to talk to their senators and congresspeople about the U.S. government’s support of Saudi Arabia, which has used American weapons and logistical support to kill tens of thousands of Yemenis, many of whom were civilians.

Dragnev said it was important that government representatives hear from their constituents about this issue, which does not get much media coverage.

“We need to put that pressure on them,” she said. “We need to hold them accountable.”

Amine El Moznine, 19, political science major, said he used the time given during the event to call his congressman, Ro Khanna (D-CA 17th District), who was praised by Dragnev for his work in supporting legislation to end U.S. support of the Saudis.

El Moznine said he thought the event did a good job of informing students about Yemen, which gets “despicably low coverage” in the media.

Ridah Azhar, 20, political science major and an organizer of the event, said she hoped students realized how much power they have in their voices.

If enough knowledge is spread and enough pressure is put on politicians, U.S. support of Saudi Arabia’s attacks in Yemen will end, Dragnev said.

And this is hugely important, Almaznaei said, because without U.S. support, Saudi Arabia won’t have the will or the means to keep fighting in Yemen.

“If the U.S. stops supporting Saudi Arabia, I guarantee they won’t stay a year in Yemen.”