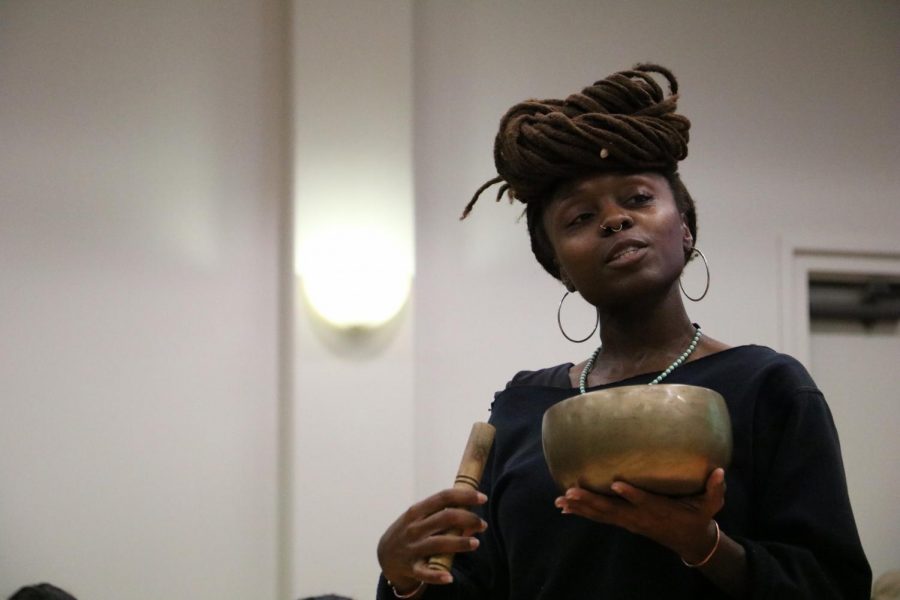 Fountainetta Coleman, an Assessment Specialist at Foothill, immerses the audience with sounds from an angelic sounding bowl for Rock the Bells in Conference Room A and B on Nov 29.

Hundreds of De Anza College students clapped, shouted and stomped to the beat of the hip hop movement at the third annual Rock the School Bells Event hosted by the Men of Color Community on November 29.

According to Erick Aragon, Faculty and Director of Outreach,  in an attempt to “engage the community in a different way”, the Men of Color Community, a De Anza organization dedicated to providing support and empowerment to address the achievement gap, hosted the third annual ‘Rock the Bells’ event along with several other organizations.

“Hip-hop has always been a language and culture people understand, so we used hip hop to explore teaching and learning of students,” said Aragon.

By using the culture of hip-hop, the organizers were able to connect to the student audience about their main objective of addressing the achievement gap.

‘If you look at hip-hop lyrics it’s normally about the struggle about somebody and their community,” said Aragon.

The conference rooms filled with clapping shouting and the power of the hip hop movement from over a hundred students who attended for all kinds of different reasons.

“I just want to learn about things that typically aren’t talked about, so we’re gonna go to the appropriation of hip-hop workshop”, said Victoria Buckett, 26, communications major.

The event  provided a space of creativity, non-judgement and culture for all students and faculty who attended.

“I think it’s great that there’s a platform that gives students somewhere to come and express themselves and learn about things that typically aren’t talked about,” said Buckett.