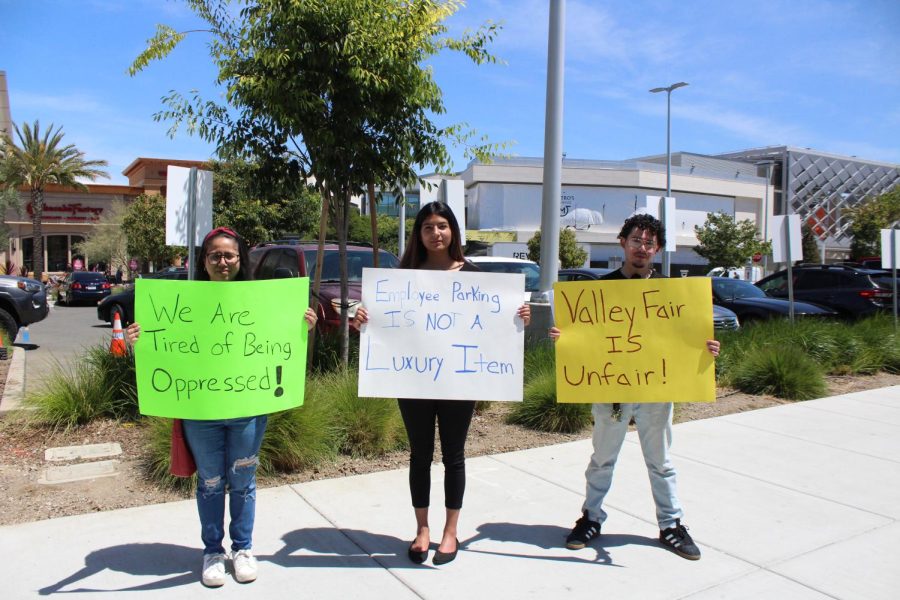 $480 can buy a round trip ticket to Denver, Colorado.

$480 can buy a good load of groceries or can pay for a big chunk of rent.

But for employees of Valley Fair Mall that drive to work, that $480 will be going right back to the mall just so that they can park their cars at work. In February, Westfield Valley Fair instituted its employee parking fee and required employees to pay $3 a day or $40 a month for a parking pass into the Valley Fair.

On a sunny morning on May 19, members of a group known as Low Income Versus Elite (LIVE) continued protesting in front of the mall and called for the removal of policy. The group is made up of mall employees that also go to San Jose State University.

The members of LIVE at the protest said that they believe that the mall’s new policy is rooted in greed and say that the fees are causing problems outside of work.

Thursday’s demonstration was not the first protests that occurred at Valley Fair in response to the policy.

Other mall employees at various stores and restaurants around the mall also voiced their displeasure with the mall’s parking fees by signing a petition that has already garnered over 1,000 signatures. Many employees also included a comment on their signed name for the petition.

“It’s ludicrous that the mall has decided to put a weight on those who are allowing the system to flourish,” said Raine Beamon, who works at the clothing store Diesel. “Without us, the mall would cease to operate.”

Vivian Nguyen, an employee at American Eagle, also voiced her concerns in her petition.

“It’s not fair for employees to pay for parking. Parking is already hard to find, and there are not always spots for us, so why do we have to pay?”, said Nguyen.

Even though the policy has been in effect for three months, there is still outrage and hope that they can be overturned.

Gomez said that he believes that senior mall leadership has been silent on this issue purposely because they are hoping that the media attention dies down and the employees will just accept the parking fees in the long run.

The mall released its own statement on the protests that occurred in February saying, “We support the right of employees who work at the center to voice their opinions but we remain committed to our controlled parking plan.”

Valley Fair has stated that the parking fees are put in place to deter non-customers from parking on mall property, but employees say that they are skeptical of the mall’s reasoning.

“Where does that money even go?,” said Nika Torres, an employee at the popular cosmetics store Lush.

For Gomez, he said that the protest is about something bigger than just his self-interest.

“I’m here today to fight for those who don’t believe they have that power to fight because it’s not just an issue that is affecting me, but it’s affecting other workers around the mall,” Gomez said.

LIVE’s demands are that parking go back to being free for all employees and prefer not to compromise on any lower price.

“It’s still coming out of my pockets,” said Gomez. “And I don’t think that’s fair, at the end of the day.”

In response to the policy, some stores in the mall have opted to cover the fees for their employees. Workers at Sports Fever told La Voz that their management had decided to cover the cost and that they are not paying anything out of pocket to park.

Other employees have also had similar sentiments. Albert Molina, an employee at Nokwal, said that the onus shouldn’t be on employees.

“I think it would be a good idea for parking passes to be provided for the employees all around because if not, we’re basically paying to work,” Molina said.

LIVE and those who signed the petition say that they are hoping to have another bargaining meeting with Sue Newsome, senior general manager of the mall and others who were involved in making the decision to enforce the parking fee.

Gomez said that since the fees were introduced, that he has seen the overall morale of his co-workers and other employees at the mall shift in a negative way.

“I’ve come to the conclusion that the vibe of the mall has just been killed,” said Gomez. “And we all know that loving the place that you work makes you want to come back to work every other day.”

“I just hope our protests can change that.”