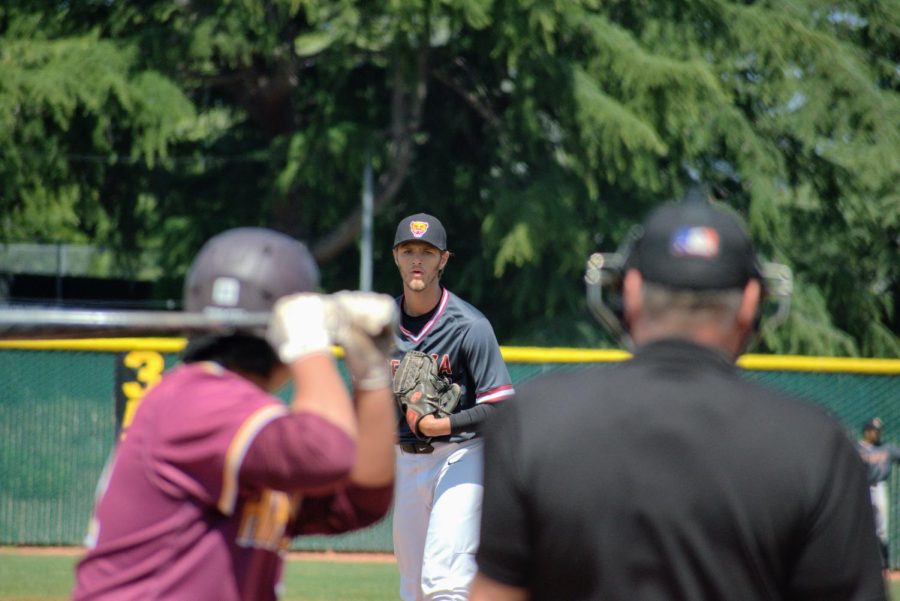 On April 28, Starting Pitcher Jason Hartwick pitched 5.1 innings in his second longest start of the season.

CUPERTINO– The De Anza Mountain Lions pitching couldn’t stop Hartnell’s explosive offense in their final loss of the 2022 season on April 28, finishing with a disappointing 6-34 record.

The Mountain Lions’ bats came to life towards the end of the game scoring all six runs in the last four innings of the game. Despite the run support, De Anza’s bullpen struggled to keep the flood gates closed, allowing six runs, eventually losing 10-6.

“We got a great group of guys, it’s just we couldn’t find the pieces to put the puzzle together,” said shortstop Jarret Chapman. “We just couldn’t capitalize most of the time.”

Starting pitcher Jason Hartwick had a strong start. In his first three frames of work, he only allowed two hits, but Hartnell’s bats eventually got going with a two-run home run launched to right center field by their designated hitter Salvador Lopez in the top of the fourth inning.

Hartwick pitched through the fifth without allowing a hit but would ultimately fall victim to another two run home run to Lopez in almost the identical spot.

“I was trying to strike him out for sure,” said Hartwick. “I got behind the count and gave him the same pitch and he did it twice in a row.”

The second blast would end Hartwick’s day on the mound and thus be the last inning of his 2022 season.

The Mountain Lions responded in the bottom half of the fifth by scoring three runs of their own. A double by right fielder Richard Maes drove in two runs followed by a single by teammate Caleb Rodriguez cutting the lead to 4-3.

The Mountain Lions’ lead wouldn’t last long as relief pitcher Ryan O’Charchin ended up giving up four runs of his own in the seventh inning.

Facing an 8-3 deficit, De Anza responded by scoring three runs in the bottom half of the inning punctuated by a double by second baseman Caleb Severson cutting the lead to 8-6.

Despite scoring those six runs, the Mountain Lions ended up leaving a combined eight runners stranded on base in the sixth, seventh and eighth.

Manager Don Watkins said he was happy with his team’s commitment and focus throughout the season despite all of the losses.

“I love every one of these kids,” said Watkins. “Overall I’m very proud of these guys and I already look forward to Aug. 9 when we get after it again.”