The almost-Cinderella Story: How the Mountain Lions came close to upsetting the No. 1 team in the state6 min read 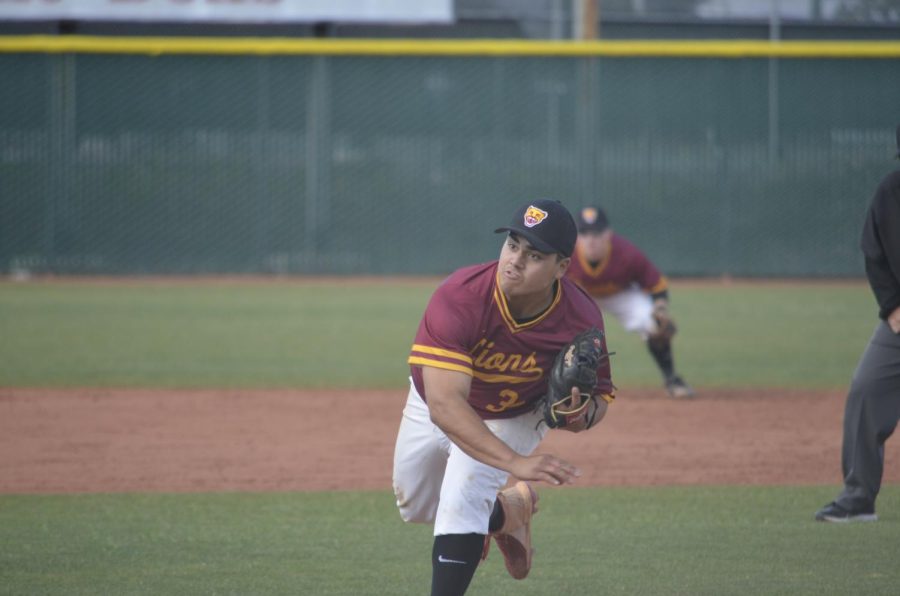 Pitcher Jacob Soto was key player in the De Anza comeback. He pitched two shutout innings and struck out two batters to hold the Renegades scoreless in the seventh and eighth innings.

CUPERTINO– Alex Woo wasn’t having the best of games. When he stepped up to the plate in the eighth inning, he was already 0-for-2, including striking out looking on an offspeed pitch in the third inning.

But his next at-bat changed the entire scope of the game for the Mountain Lions who were down 9-0 against the No. 1 team in the state, the Ohlone College Renegades. It was looking like another De Anza loss, something the team has done 31 times this season.

As Woo swung his silver and red metallic bat on a 2-2 count, the ball looked like it had enough to land all the way out to South Sterling Road, but it fell just short of the outfield wall and was caught.

As simple as that play might have looked, it was a huge turning point in the game. As the ball was caught, outfielder Anthony Di Vittorio who was waiting patiently on third base, scored on his teammate’s sacrifice fly to score De Anza’s first run of the game.

After scoring their first run of the game, the Mountain Lions continued to cross home plate in any way they could. It got to the point that the Renegades had to change pitchers several times midway through the ninth inning because the batters they were facing would not quit.

Batter after batter got on base and more runs were scored. The Mountain Lions cut the lead to just one in the ninth inning. Ohlone’s dugout looked at each other with blank stares as the De Anza dugout got louder and louder with every run scored. It felt like runners were crossing home plate through a portal that Dr. Strange opened.

With runners on first and second, infielder Ash Yusuf flew out and the No. 1 ranked Renegades narrowly escaped with a 10-9 victory on April 22, avoiding one of the biggest upsets of the year.

But even in the loss, the Mountain Lions found a moral win. They just were one run shy of upsetting a team who has won 35 games and hasn’t lost since Feb. 5.

The Mountain Lions stayed persistent, but it’s not something that they just picked up in this game, they have been fighting until the last batter out all year.

“As long as you got a dog in the fight, that’s all you can ask for right,” said Mountain Lions head coach Don Watkins. “They just didn’t give up all year and they have been that way even when things didn’t go their way.”

It wasn’t a pretty start to the game for De Anza. Pitcher Cody Lockhart gave up four runs in the first inning, including a three-run homer.

Lockhart showed flashes of rebounding in the second and third innings. He was able to strike out three batters and gave up no runs. He even got out of a dangerous situation in the third where he gave up no runs despite the Renegades having two runners in scoring position.

Offensively, De Anza did a good job of getting their batters on base through seven innings, but could not capitalize when it came time to bring those runners across home plate.

At the bottom of the eighth, it looked bleak for the Mountain Lions. The scoreboard showed 9-0 and the Ohlone players were already talking about the car trip back home and what would be for dinner after the game.

After Woo’s sacrifice fly to put De Anza on the board, the Mountain Lions hot hitting streak started.

Shortstop James Gayer hit an RBI single to bring home Yusuf, giving De Anza their second run of the game. Later in the inning, the Mountain Lions scored on a wild pitch to cut the lead to just six heading into the ninth inning.

After giving up a run in the ninth, De Anza still faced an uphill battle being down 10-3.

The Mountain Lions’ first run in the ninth came when infielder Iram Macias recorded an RBI double to bring home Vittorio from second base.

De Anza proceeded to score runs at will. When centerfielder Caleb Rodriguez hit an RBI single to bring home Cooper Callison from third, the Mountain Lion dugout got loud as they had just made it a one run game.

After Vittorio was hit by a pitch, De Anza had runners on first and second with two outs, on the verge of pulling off one of the biggest upsets of the year.

Up to plate was Yusuf who struck out looking earlier in the inning. With the count at 3-2, Yusuf hit a ball high in the air. The ball lifted into right field and eventually dropped into the glove of the Renegade right fielder.

Just like that, the rally was stopped and the game was over. The cheers and towel waving from the bench were no more and the Renegades high fived each other to celebrate their escape.

After the game, the Mountain Lions walked to right field for a huddle, and oddly enough for a team that had just lost, the players celebrated like they had just won a state title. Watkins greeted his team with a big smile and praised them for their Herculean efforts.

“We went out there and gave them our all,” Woo said after the game.

Even in defeat, the Mountain Lions showed that they could compete with the No. 1 team in the state. De Anza’s eight-game losing streak didn’t feel as big at that moment. It was a moral victory for a team who hasn’t put up many W’s in the win column.

Watkins hopes that this performance will fuel his team to finish out the season strong.

“This stretch is our championship,” Watkins said. “We just want to go 3-0 and finish out the year strong.”