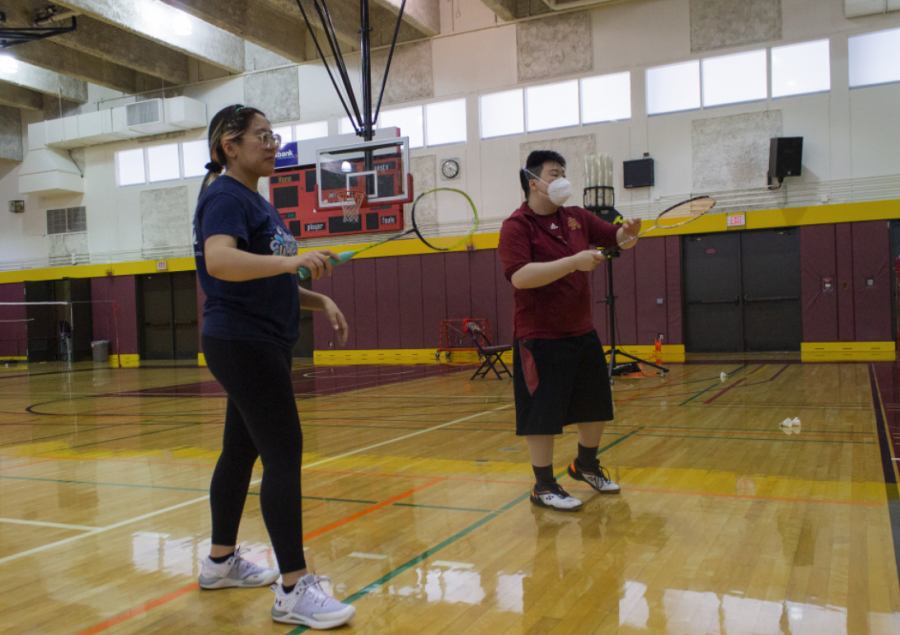 After two years of being shut down by the pandemic, De Anza College’s women’s badminton team made their first return to official competition this year.

The majority of the team, including the coaches, said that they believed that their biggest test this season would be against Fresno City College for the Coast Conference Championship. They are also hoping to maintain their undefeated streak while keeping themselves safe during the pandemic.

Head coach Mark Landefeld said that Fresno has always been their hardest opponent to beat. Fresno would take over for the Coast Conference Championship if they win by eight points more.

The Mountain Lions are currently eight years removed from winning their last State Championship. With the team’s current winning streak of 11, the players are in a position to achieve that honor once again.

“We’re really strong this year,” Team captain Emma Walker, 18, economics major said. “We have a lot of great players and I think we really do have a shot at state championships.”

Assistant coach Jay Dinh, was team captain from 2013 to 2014 and was there when they won the conference and state championship in both years. Dinh, who uses they/them pronouns, said that they are looking forward to seeing this team get over the hump.

“We’ve gotten really close, but not quite,” Dinh said. “So what we’re looking forward to this year is to be able to represent the north at the state finals, and then hopefully take the state title after that.”

If they win against Fresno, the Mountain Lions would compete against Irvine City College for the Coast Conference Championship on May 12.

Since the badminton season resumed during a pandemic, players on the team had to undergo multiple screenings and pass health guidelines in order to compete with other community colleges.

Landefeld said the biggest difference between prior to and after the pandemic was that the players need to wear masks and test twice every week.

“I’m a little bit paranoid that I’ll get to campus tomorrow and find out that somebody has tested positive,” Landefeld said. “We need to quarantine them and they’re not available for the match.”

If players do test positive, Dinh said that the players would have to miss practice and competition for an entire week.

“(Thankfully) It seems like we weren’t super affected by COVID,” Walker said. “I believe we have the biggest team in the state so numbers and strength of players are definitely not a problem for us.”

Additionally, Dinh said another struggle the team experienced was the transition some players had to make between high school and college-level badminton. Dinh believed that despite the team consisting of players with different backgrounds and experience levels, that it will not stop the girls from playing strong.

“Everyone is technically a first-year,” Dinh said. “Even if they competed in high school, it’s different to play at the college level because we’re expecting them to play more than one event at once.”

Asked about her experience, Walker said she found the team by searching on the De Anza website and said that she had been learning to play alongside returning and new players.

Malaya Paras-Mangrobang, 19, kinesiology major, learned of the team from Landefeld when she was playing for James Logan High School. She said she was initially worried about joining because of the ranking of the team, but her interest in badminton eventually won over.

“We have to change up our dynamic and see how we play with one another,” Paras-Mangrobang said. “I like it and it’s really nice because everyone’s really supportive no matter if you win or lose.”

Dinh said that their goal for the rest of the season is to be healthy and confident for their games during the pandemic.

“We’ve had a strong start and we’ve got a great group of girls,” Dinh said. “They’re all very dedicated, hardworking, and what I’m looking forward to them doing is making sure that all that hard work pays off, and that they finish strong.”

Paras-Mangrobang said the team is open to anyone who has a passion for badminton because everyone on the team is welcoming.

“It’s like a family,” Paras-Mangrobang said. “It’ll grow on you.”

Editorial Update (May 18, 2022) — A previous version of this story mistakingly said that the badminton team was eight years removed from their last Conference Championship when it was State.