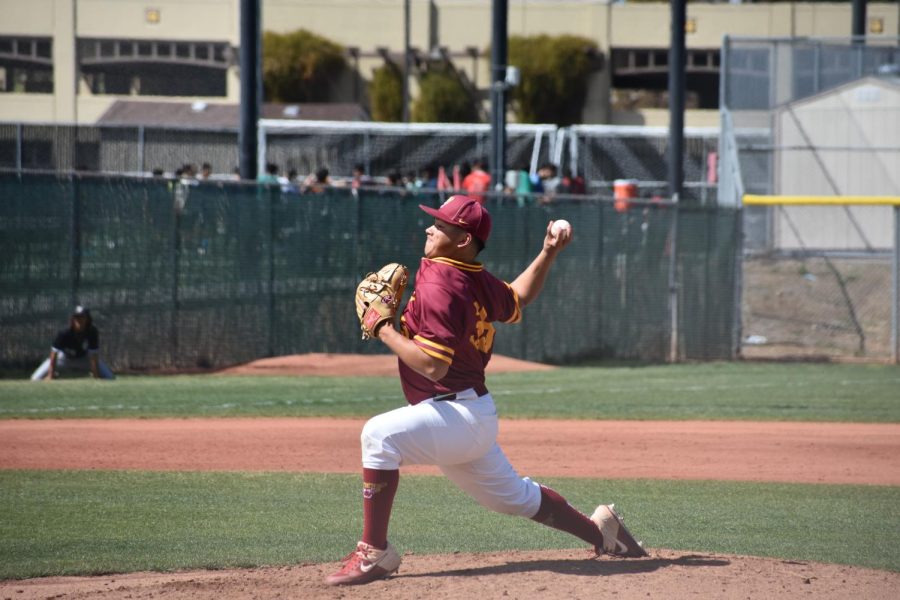 De Anza Pitcher Ryan O'Charchin gave up no runs and recorded five strikeouts through five innings in a 4-1 loss to Mission College on April 19.

CUPERTINO– The Mountain Lions played one of their best defensive games of the season through seven innings, but it wasn’t enough.

After holding a one run lead in the seventh inning on Tuesday, April 19, the Mountain Lions gave up four runs in three innings in a 4-1 loss to Mission College.

“I wanted to go three innings and however the game was going, I was going to keep doing what I was doing,” said O’Charchin.

The Mountain Lions got going early in the game, scoring one run in the first inning. Outfielder Anthony Di Vittorio hit a double to start the inning and catcher Cooper Callison brought him home with a RBI single.

But after a three-hit inning in the first, the Mountain Lions were virtually shut out for the rest of the game. They showed some life in the fourth inning when they had runners on second and third, but left them both stranded when infielder Jacob Sotto was ruled out on a pop fly.

De Anza failed to get a hit after the fifth inning after recording five hits through four innings.

Despite the loss, Head Coach Don Watkins said that he took away some positives.

“No errors and we struck out ten guys,” Watkins said. “I think we had a lot of positive takeaways defensively.”

Up next, the Mountain Lions will have a tough task facing the no. 1 ranked Ohlone Renegades on April 22, to whom they lost by a combined margin of eight runs across two games.

Even with the loss, Watkins doesn’t necessarily think there needs to be drastic changes to have a shot to beat the Renegades.

There’s not really a whole lot of improvements,” said Watkins. “We just gotta keep building on this right here, even though it’s a loss, it’s a success for us.”