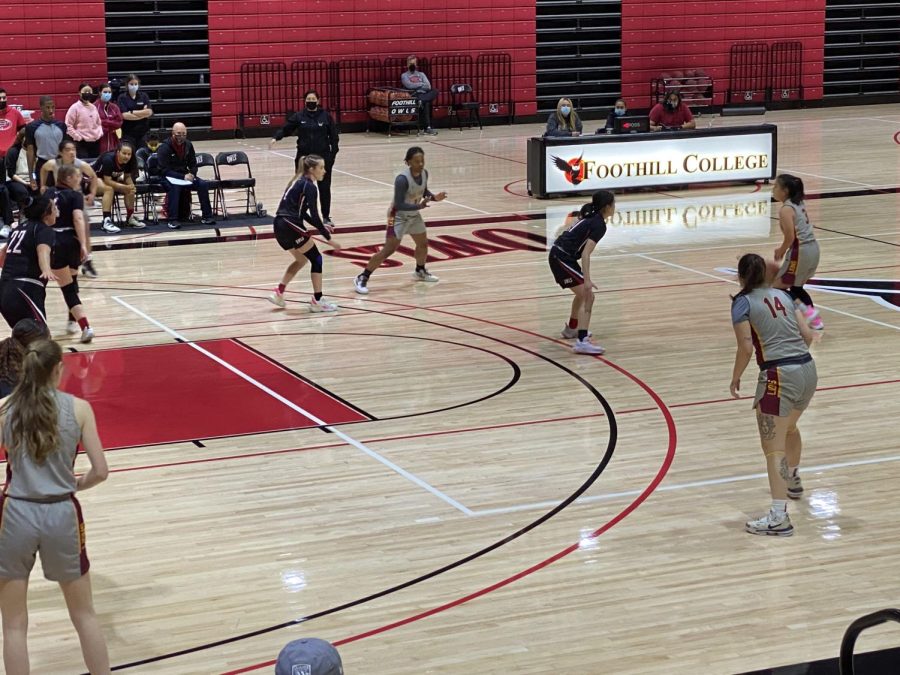 De Anza guard Tianna Ngo sets up a play in the half-court against Foothill College on Feb. 25

In their 24th and final game of the season, the De Anza Mountain Lions dominated the entire contest. They started the game with a 5-0 run and never squandered the lead.

In the early stages of the game, the De Anza offense was effective in running on transition.

Guard Danielle Gezzi scored 19 points and was the primary chance creator for the Mountain Lions passing game, leading the team with seven assists.

Head coach Aniya Baker said her team’s selflessness was the reason they performed so well.

“I think just the chemistry and the togetherness was the best part about tonight,” said Baker. “We always talk about being a team, not doing things for the individual self.”

To cap off their great start, guard Annie Do sank a backwards one-handed layup as the shot clock expired .

De Anza ended the first quarter up 21-14 and kept their hot streak going through the second quarter extending their lead to 34-24 at half.

Once the third quarter began, the Mountain Lions gained even more momentum after a hot start from forward Maryam Sallam, who was playing at the center position.

She scored six out of her team’s first eight points and finished the game as De Anza’s leading scorer with 23 points while also snagging 11 rebounds.

De Anza also stepped up their defensive intensity in the third. Guard Ashley Sipanya, who was injured in the second quarter, came back into the game and got a steal and broke up another pass shortly after.

The Mountain Lions then expanded their lead to as high as 18 points, closing the third quarter up 51-33 with 2:27 left.

Using what had been working for them in the first three quarters, De Anza was able to close out their opponents in the fourth quarter.

De Anza had a great counter for Foothill at almost every step.

“Honestly the game plan was just to stay consistent effort wise” said Baker. “We’ve been practicing our sets, we’ve been preparing for this day, all we needed was the effort and intensity behind it and we thought we would do pretty well”.