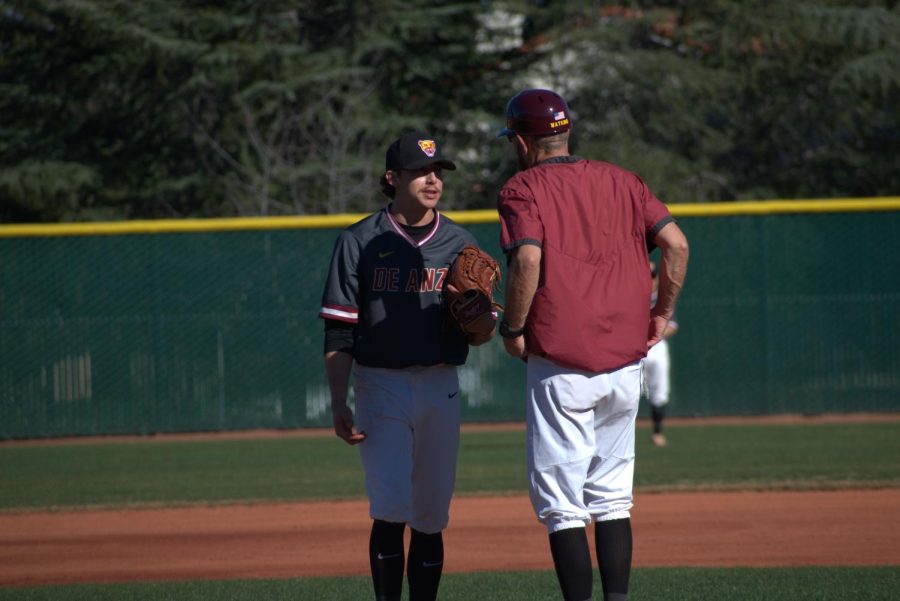 De Anza starting pitcher Jaime Blanco gave up five runs in his second start of the season against Sierra College on Feb. 12.

Despite getting fifteen hits of their own, the Mountain Lions pitching struggled to contain Sierra College losing 15-8.

“The balk calls got to me and I feel like the game really got away from us there,” said Blanco. “We got out-competed on the mound and that’s really what it came down to.”

Sierra would have its best offensive outing in the seventh inning, batting around the lineup and scoring seven runs on three hits to push the score up to 14-1.

De Anza relief pitcher Jose Espinoza made his season debut in the eighth inning to a thunderous applause from his teammates. Espinoza would get out of a jam leaving two runners stranded and being the only pitcher to not allow a run in an inning.

“Balls and walks have been an issue for our pitching staff so I just wanted to go out there and be really accurate today,” Espinoza said. “I was just pumped to be out there with my boys.”

The Mountain Lions would score three runs of their own, cutting the lead 14-3 in the bottom of the eight inning. The inning started with a lead off double by third baseman Iram Macias, followed by a pinch hit RBI double by catcher Cooper Callison.

Callison also provided a crucial hit in the ninth, hitting his second RBI double but the game ended after center fielder Caleb Rodriguez grounded out.

“We’ve been really focusing on not playing against ourselves and more on playing against the other team,” said Callison. “I think that’s what we did in the later innings.”

After the loss,  left fielder Anthony DI Vittorio said the team’s record doesn’t reflect how good they are.

“I think we are a lot better and I think we’ve shown that by being able to come back,” said Di Vittori. “We just need to keep that momentum throughout the whole game and clean up our mistakes. If we do that I think we will be just fine.”