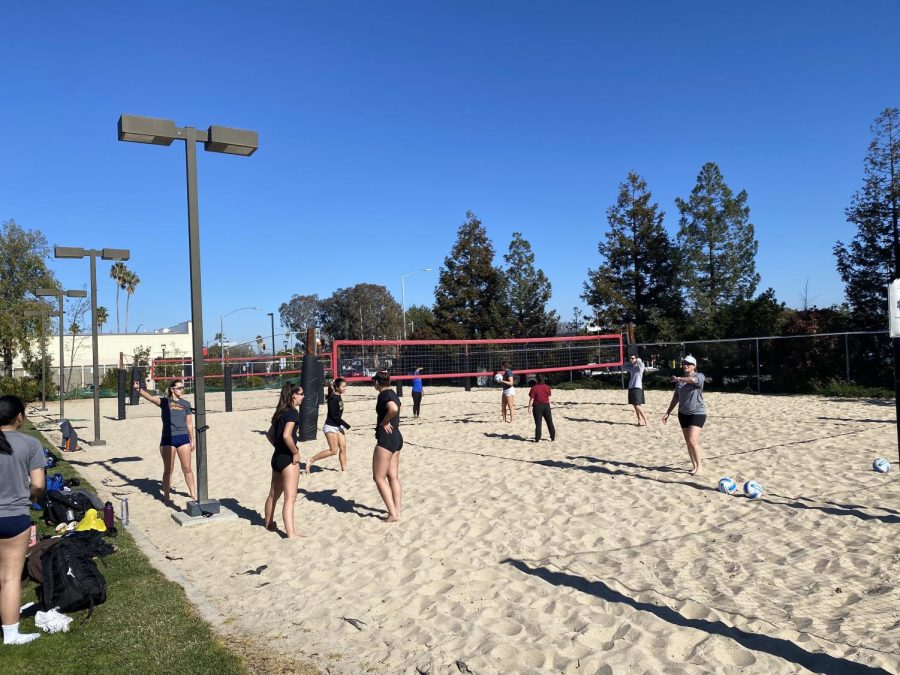 Beach volleyball is a different animal than the indoor game. There are a lot of aspects of the game that provide different challenges even for the most experienced players who take it up.

As De Anza College gears up for their inaugural season of this new sport, many of their student athletes will need to make that adjustment.

Adriana Williams, 19, political science major, is the team captain of the new De Anza beach volleyball team. She is currently on the indoor team and this is her first crack at the sandy outdoor version of the sport.

“I’m not really a big outdoor person in general,” Williams said.“Having the sun, wind and sand all over you, it’s a bit uncomfortable, but I like the conditioning and I like the play.”

Every student athlete from the indoor volleyball team, minus three, is taking part in this winter beach volleyball season. The team has added another five players as well, bringing the final roster total to approximately 20 when the season starts on February 16th.

“[I’m excited] about getting smarter and getting better, so that it can help my indoor play,” Williams added. “If it helps me get better at all aspects of volleyball, I’m definitely down for it.”

There are a lot of challenges that come with coaching an expansion program, but working in De Anza’s favor is that it has a coach with a lot of experience.

Dawnis Guevara has coached De Anza indoor volleyball for 21 years. During that time, she has become the winningest coach in school history with 8 conference championships and 15 total postseason appearances.

Upon the creation of the new outdoor program, Guevara said she was offered the job right away.

“I have played beach volleyball forever. I just haven’t coached a team,” Guevara said. “[It’s] very different in that you cannot coach while a play is happening.”

“I have to wait for a timeout or for them to switch sides on sevens. I’m very used to constant communication on the sidelines”.

In beach volleyball the teams switch sides of the court after a cumulative seven points are scored.

One of the biggest challenges that the  beach volleyball team will have to face in years to come is the absence of a home field. Because it does not have the facilities, the Mountain Lions will have to play every game of their season on the road.

It is estimated by the school government that it would take three to five years before De Anza has a fully functional beach court of their own on campus for the team to use.

This gives the team a unique practice experience compared to the other De Anza athletics programs. The team was able to get practice courts within a mile of the main campus at Valley Church located on Stelling Road and Homestead.

“We’ve been lucky enough to get this facility,” said Guevara. “But, we only have two and half courts with the group that we have.”

Despite the lack of on campus resources, Guevara said that the team is making a lot of progress.

“I was very surprised after the first week how quite a few of them have transitioned from the indoor to the sand court,” said Guevara. “That is the hardest part. Just getting used to the surface and nuances of the game.”

While the addition of beach volleyball is very exciting, it does come at the expense of another legacy sport. De Anza also decided to end its softball program.

For the last three years of its existence, the softball team struggled to fill their roster, and in 2019, De Anza even sent students who were interested in playing softball to Foothill College instead.

With a lack of interest in softball, De Anza opted to go for a sport whose popularity has gone on a huge rise. Over the last five years, beach volleyball has been the fastest growing NCAA sport in Division I.

The rise in popularity can also be credited to athletes like Kerri Walsh-Jennings and Misty May-Treanor, who as a duo won a gold medal in the 2012 Rio Olympics. Then in 2016,Walsh-Jennings competed with April Ross and earned ad bronze.

The teams’ first game of the season is on Feb. 16 against Feather River College and will take place at Monterey Peninsula College, with De Anza being the technical home team.