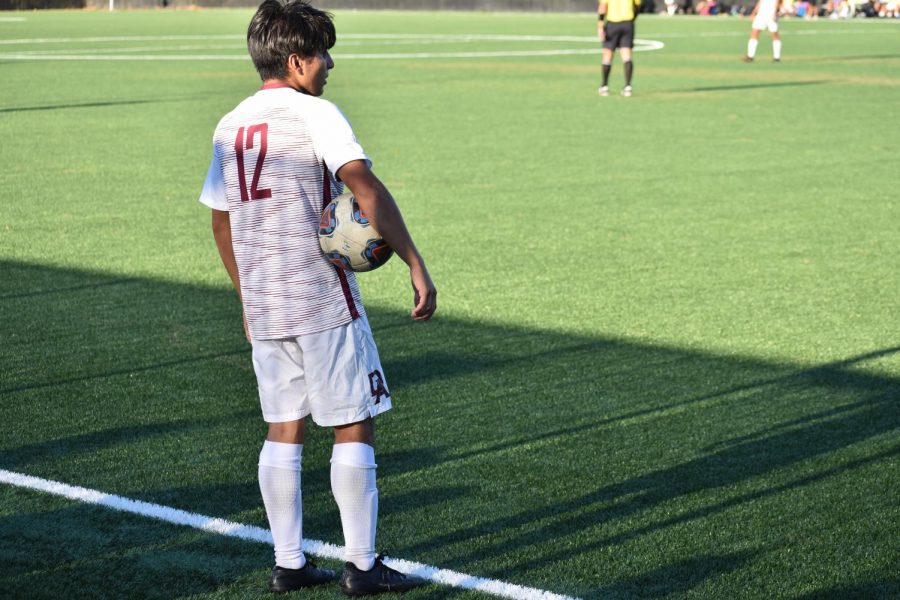 De Anza fullback Jaeson Gonzalez prepares to take a throw-in during the first half of a rivalry clash with Foothill College.

In a clash between two of the top teams in the conference, the De Anza Mountain Lions dropped their final match of the regular season to the Foothill Owls 3-1 on Friday.

After this result, the Mountain Lions finish the year with an overall record of 12W-2L-5D and 7W-1L-4D in conference, likely holding the fourth seed in the upcoming play-offs.

The loss was uncharacteristic for a side that had previously gone unbeaten in a run of 16 games dating back to early September. De Anza missed an early opportunity in the 15th minute to jump ahead and paid the price. By halftime, the Owls would burn them twice on the counter, with one goal coming in open play and the other a converted penalty.

“Our style of play is that we like to move the ball a lot, so we were opened up once they picked us up close,” said head coach Rusty Johnson. “We got caught a couple times on the switch, didn’t mark up when they were in the box, and in a game like this, you can’t do that.”

After securing a big first half lead, Foothill went on to make life difficult for their visitors by bringing all ten outfield players back to defend, thus compressing the space available to play. Because of this, the second half was not as fluid as the first, and was marred by multiple stoppages which saw De Anza collect three yellow cards because of late tackles trying to win back the ball.

Foothill forward, Djelani Phillips, would tally his second goal of the game in the 60th minute, putting his team up 3-0, before De Anza pulled back a consolation goal in the 86th minute courtesy of a cross by midfielder Diego Baca that found the head of teammate and forward, Bruno Vasconcelos.

Despite the standings suggesting otherwise, midfielder Marco Torres said that this wasn’t necessarily the team’s biggest test of the year.

“I don’t think that this opponent was necessarily the hardest,” Torres said. “I think the reason it got hard was because of the situation we got ourselves into in the first half.”

The Mountain Lions will not have time to hang their heads. The Coast Conference will convene early next week to finalize seeding and De Anza will begin it’s postseason as early as next Saturday, Nov. 20. Coach Johnson said that it’s been a successful season.

“We’re happy with where we’re sitting,” Johnson said. “As much as it stings, I like reminding the guys what a loss feels like and I think it could serve as a good lesson going into the playoffs.”

Zachary Addison, who has often been one of the first forwards Johnson has opted to bring off his bench for a spark, said he agrees.

“Losses are never a good thing, but the unity that we had in our huddle after the loss was promising,” Addison said. “We’re totally unified. There’s no arguing or bickering.”

On a hopeful note, the Mountain Lions are also hoping to welcome back their top goal scorer to the lineup ahead of their next clash. After suffering an ankle injury and spraining his medial collateral ligament a few weeks ago, forward Rayshawn Greer said that he’s been given the green light by team doctors and felt that he could’ve made a difference on today’s result.

“It looked to me that we were missing an element up top, an extra spark as you will,” Greer said. “We had a little half chance early and if I was in there, maybe I could have put that extra pressure on to finish and give more motivation to the team.”

The play-offs will involve three rounds total with the higher seed hosting the lower. The final, known as the State Championships, are scheduled to take place Dec. 3 and 5 at Mt. San Antonio College in Walnut, California.