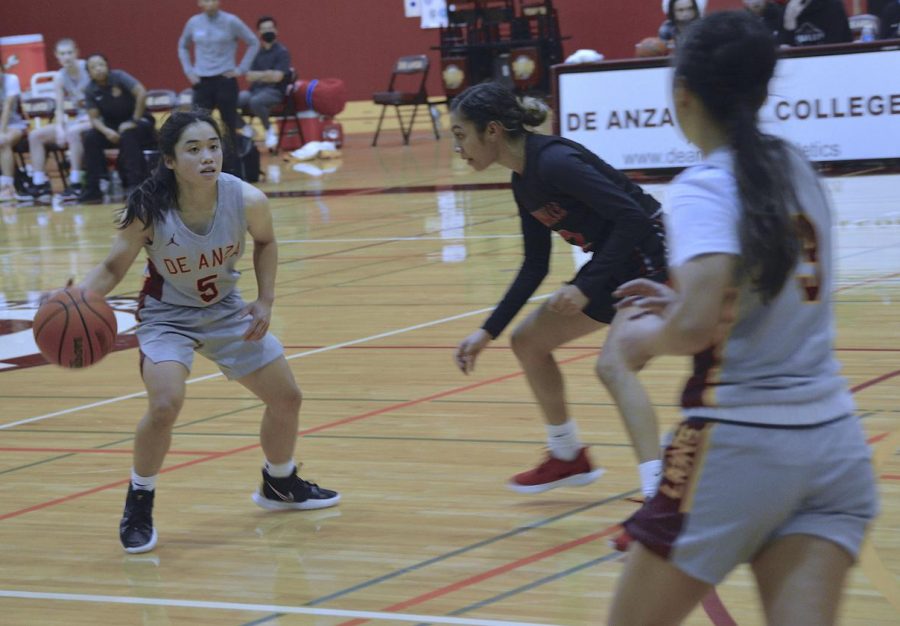 Sophomore shooting guard Annie Do passes to her teammate Tianna Ngo in a 69-42 home win over Porterville College on Nov. 2.

On Nov. 2, in the first game of the basketball season, the De Anza College Mountain Lions won 69-42 against Porterville College.

The Pirates led by six points at the start, but the Mountain Lions found their rhythm and closed the first quarter leading with a score of 11-10.

Leading scorer and point guard, Danielle Gezzi, said that in the beginning they made a lot of mistakes they don’t usually make in practice, which led to the slow start.

“But towards the halfway point, we started picking it up, bringing the intensity.” Gezzi said. “And definitely started pulling away in the second half.”

Gezzi said one reason they found their groove was the team’s willingness to pass the ball.

“Game highlights were definitely the ball movement.” Gezzi said. “We did sort of struggle with a couple of scrambles with the ball, but us picking it back up definitely saved us from some terrible turnovers.”

With a series of fast-breaks led by Gezzi, and three-point shots made by shooting guard Annie Do, the third quarter ended 51-34. The momentum continued until the end of the game.

Coach Aniya Baker said that another factor that led to the victory was good communication.

“Communication. It seems so small, but we communicated on the floor defensively. It pushed us, so we created some stills,” Baker said. “We were able to get out in the frontcourt. And that’s all over communication. That’s something we preach a lot in practice.”

Baker said that despite the victory, there are still things that the team needs to work on.

“Tonight, they gave their best effort,” Baker said. “But now we’re gonna go back to the drawing board and get together our X’s and O’s.”

De Anza will host Marin College on Thursday at 5 p.m., followed by playing Modesto on Saturday at 2 p.m.