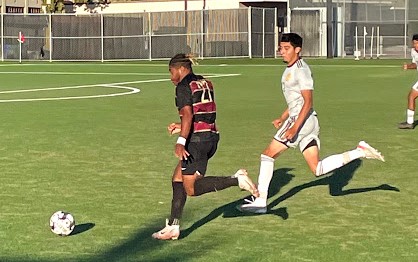 Rayshawn Greer forward blowing past the Hartnell defender in the 1-0 game.

De Anza men’s soccer team was able to come away with a 1-0 win against the undefeated Hartnell College Panthers on Tuesday in their first conference game of the year, bringing them to a record of 6-1-1.

De Anza struggled out the gate, with Hartnell dominating possession with their speed and physical play, but De Anza managed to get a goal on a header from Nolan Grieve right before halftime.

Hartnell had many chances to score, but goalie Julian Escobar was excellent in setting the defense and allowing De Anza to hold on to the win.

Roheet Sen, assistant coach, said the team felt like they were in a good spot at halftime but also knew that they needed to keep executing if they wanted to come out with a win.

“We didn’t feel in control but we knew it was going to be a tight margin game,” Sen said. “So knowing we had the goal, it’s about making sure we win the 50/50 ball battles and make sure that we had a heavier work rate than them,” Sen said.

Nolan Grieve, center back, who scored the one goal, said he was able to see that he had a great angle and made sure to capitalize.

“On the cross, it was me and one of my other teammates,” Grieve said. “I saw he was going to jump for it, but I told him to leave and I just had a good connection with the ball and it went in.”

He also said that it’s good to start the conference games with a win, but knows this is just the start of the season and they have to keep pushing and getting better.

“First game of the conference starting with a win, just gotta look at it like that,” Grieve said. “Now we gotta look to the next one to prepare for that.”

Sen said following the game that in order to win, the team knew they had to be locked in defensively with how Hartnell attacks.

“The message to our guys was to be very detail-oriented especially on defense because Hartnell plays with so much pace and they push so hard, but they  find the second ball and create nothing from something,” Sen said.

De Anza hopes to keep their win streak alive at Ohlone this Friday and move to 2-0 in their conference this season.