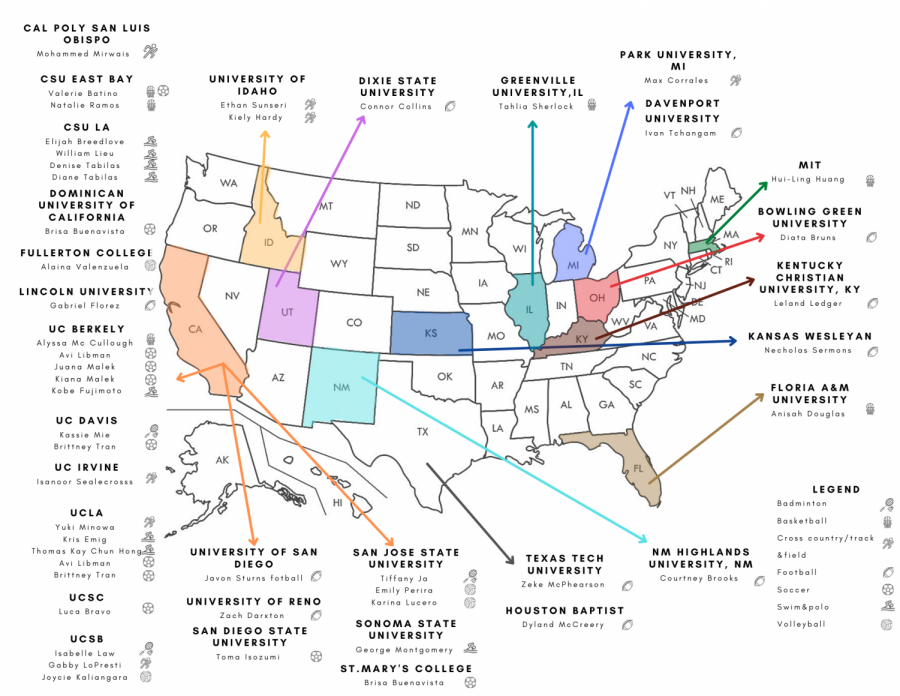 Universities where De Anza student-athletes plan to transfer in 2021.

While some already see COVID-19 becoming history, De Anza College student-athletes will disproportionately feel the impacts of the virus for years to come.

Since sports were postponed for the 2020 season, graduating athletes at four-year universities could stay back and compete for another year. This has produced a backlog and reduced spots for transfer students, said Louise Madrigal, athletic director for Student Success and Equity at De Anza.

“It’s a huge hurdle for our athletes to overcome,” Madrigal said. “Not only do they need athletic caliber and the academics to support (their admission), but competition for spots has become significantly tougher.”

For athletes, standing out amongst stiff competition requires a filmed highlight reel of their athletic ability.

“It’s very hard for me to leave on a baseball scholarship if I have nothing to show for it,” said Sierra, a 21-year-old philosophy major. “Most people don’t want film from a year or two ago.”

Graduating student athletes had two choices: give up the opportunity of another season to transfer on time or play with the hope of delayed recruitment.

“I was going back and forth for months,” Sierra said. “Staying back is a gamble, but I’m hoping to be able to play a full season.”

Other student athletes are trying to advertise their athleticism through other means.

De Anza running back Jeffrey Sampson, 18, philosophy major, said that sophomore athletes on his team have been signing up for football camps to earn facetime with coaches, as social distancing mandates have been lifted.

“That’s always helped, but it’s one of the best ways for us to do it right now,” Sampson said. “Hopefully the coaches like us, they send us their information, and we have a conversation from there.”

More information about De Anza athletics can be found here.