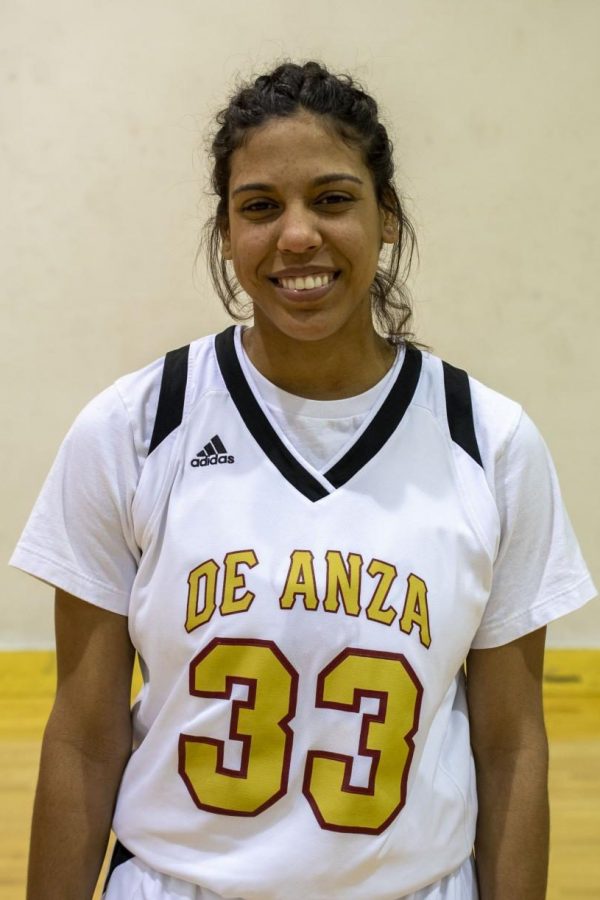 Tahlia Sherlock, 18, liberal arts major said her late grandfather was her role model and the main catalyst that inspired her to pursue her basketball career.

Tahlia Sherlock, 18, liberal arts major has paved her own way from her hometown of Riverside to De Anza women’s basketball team.

Raised by her mother and grandfather, Sherlock said she attributed her hard work and being independent to her mother.

“I would say my role models were definitely my mom and my grandpa,” said Sherlock. “My mom just because she was a single mother ever since I was five years old.”

As a full-time student-athlete, Sherlock’s classes go from 9 a.m. to 1 p.m. continuously. She studied at school until 5 p.m.before she goes home.

Sherlock said her other role model was her late grandfather. In his memory, she got a tattoo of him when she turned 18 on her collarbone. She recalled how he was always her biggest fan, taking her out to her games, to the park and to get ice cream.

Everyone supported her journey but her grandfather was the catalyst to help start her basketball career. Along the way, she met De Anza’s head coach Mike Allen at a camp he held and they clicked ever since.

“I saw the potential that was there, good attitude, hard worker, really paid attention to detail and had this passion that I wanted as a coach in a player.” said Coach Allen. “Her personality, her attitude, her character is what stood out most for me. We want players who represent the community first, the school, and then the basketball.”

Teammate Angela Tulua, 19, nursing major, said, “I think it was really easy getting to know Tahlia just because she’s such a warm, happy person to be around. Especially since we were incoming freshmen and first years, it made it easier to get to know her and be comfortable on the court.”

When it’s not about basketball, her other hobbies include writing and sewing. “Something I want to get back to is probably sew,” said Sherlock. “I kind of slacked off on that. But most definitely writing.”

Ever since camp days, Coach Allen made sure she and the other players grow not only as players, but as women.

Coach Allen said that he told her that not only did he want her to play for his program, but he also wanted to help and watch her grow as a woman and a player.