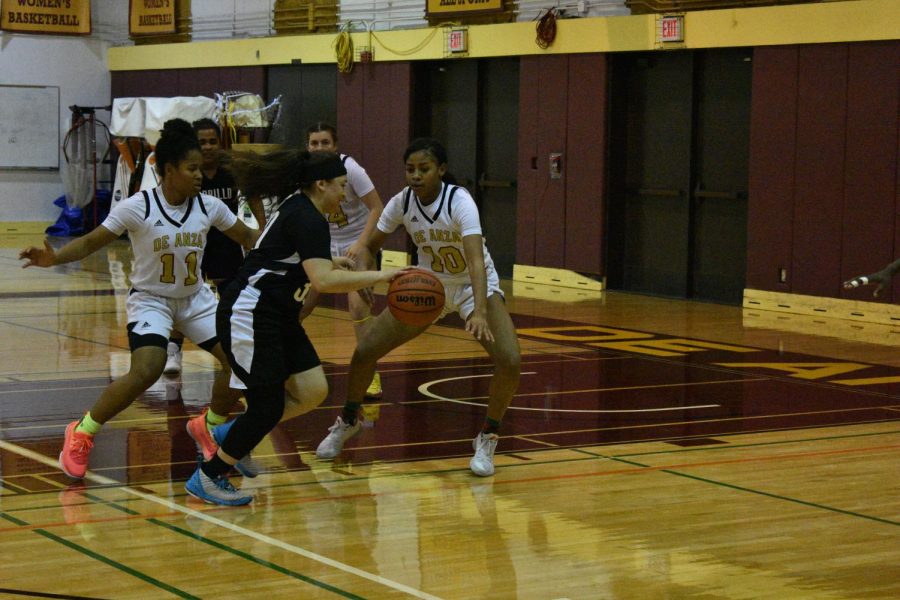 The team finished the season with a record of 18-11, a huge improvement over the 4-19 record it posted last year.

With three consecutive losses to start the season, the team’s early games were a struggle, said Danielle Gezzi, 20, kinesiology major.

“Preseason especially, in the summer for the showcase, we were really wild,” said Tahlia Sherlock, 18, liberal arts major. “We were just rushing down the court and weren’t really sure where our heads were at.”

Gezzi and Sherlock both blamed the initial struggles on a lack of team chemistry, due mainly to the fact that few of the players had played together before.

Although there wasn’t much of a connection between players at the beginning of the season, teammates began to build strong bonds throughout the season, both inside and outside of practice, said Gezzi.

One practice that helped facilitate this was players taking the time at the end of practice to say what they were grateful for, said Sherlock.

“I think that just built our bond and chemistry and it just let us be able to perform better on the court because we’re able to trust each other,” she said.

For Gezzi, the team’s ability to bond was never in doubt.

“We knew in the end that everyone was going to come together, and we did,” she said. “And we pulled through to get a championship.”

On the court, Gezzi credited the team’s improving chemistry with their ability to play to each other’s strength, especially with strong shooters on the team.

While the team was unable to make it past the first round of the Northern California regionals, Sherlock said the experience would benefit the team for the next season.

“For the returners coming back, we know what it takes,” she said. “It was our first time in a playoff game, so we know more of what to expect.”

Looking back on the season, Sherlock said she was most proud of the growth of the team as individuals and as a whole, and also how the team represented the De Anza community.

“Getting that banner, I think we just left something for De Anza as a sports team,” she said. “Something to always look back on that we can be proud of. 2019-2020 was the year that we made it happen.”