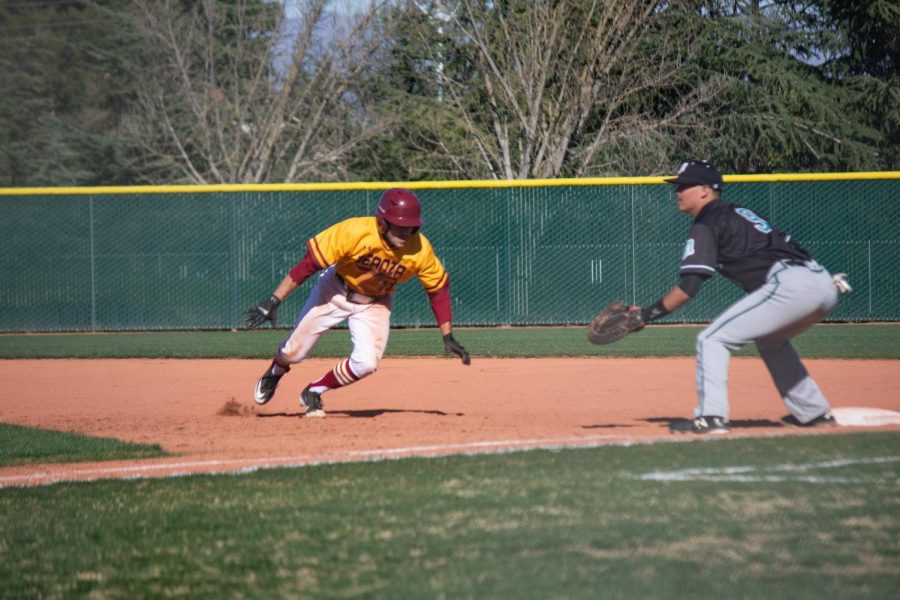 Anthony Sortino, 20, liberal arts major, runs back towards first base in a 14-1 loss on March 3 against Mission College.

De Anza Dons give up 10 runs in last two innings
With a score of 14-1, De Anza lost against Mission College on March 3 but it was the latter half of the game that was the deal breaker.

The Dons held on through the first six innings after only letting four runners score but the chemistry and momentum of the team fell apart in the final two innings. The 4-0 gap quickly turned into a 14-1 deficit by the end of the 9th inning.

“I thought we came out good, we had momentum, I feel like we played solid but those two innings really hurt us,” said Anthony Sortino, 20, liberal arts major. “Overall, I think we battled out there and we played pretty well.”

Emotions ran high and it showed as two De Anza players were ejected from the game by head coach Don Watkins.

“Even my best players can get in trouble, and that sets the tone for the rest of the team,” said Coach Watkins. “Like I told them, when your emotions go up, your intelligence goes down.”

As harsh as the season has been for the players and coaches alike, he tried his best to reach out to them, whether it be a phone call or a sit-down conversation. He treated each of his players as his sons, despite only raising daughters.

However, whether they win or lose each game, there’s still a ray of hope for everyone involved with the team.

James Sierra, 20, kinesiology major said, “there are definitely things to work on, but overall it’s a never bad day whenever you learn. So I would say it’s a pretty good day.”

He said that there are days when the team clicks, and there are times where it’s just another day to show up and check out.

Halfway through the season, the team still has a lot to go through together. With only two returnees from last year, players came at the start of the season and in January.

Pitching coach Casildo Romero said the coaching staff is still trying to figure out their players while also putting the puzzle together.

“There are times we play well and other times not so well, it’s a process,” Romero said.

Despite the loss, head coach Watkins remains optimistic about his group. Watkins said that in the end, baseball is just part of the experience, you take what you learn from it to other aspects in your life.

“They’re good guys, I just want them to be better men,” said Watkins. “I’ve been giving lemons, in a sense, but I’m trying to make lemonade out of it. I always see the glass half full instead of half empty.”