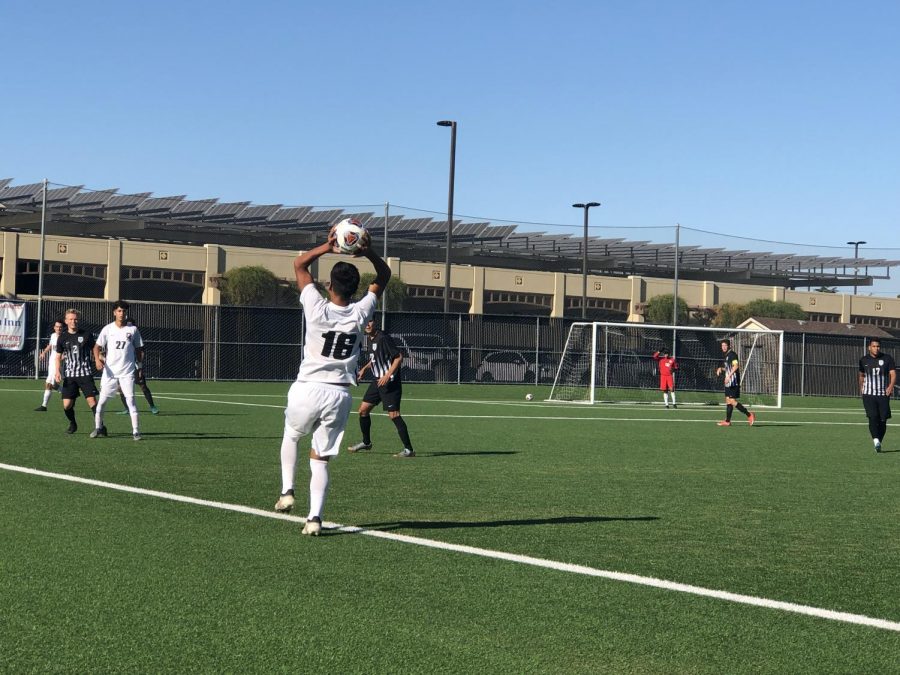 Victor Reyes, 19, business major, surveying his options for the throw-in at the Sept. 14 game against Folsom Lake College.

The Dons started the game off slow on defense, which led to Folsom Lake hitting the post three times and eventually putting one into the back of the net 36 minutes into the first half.

Having not generated many scoring opportunities in the first half, De Anza came out from the break looking to immediately create an impact.

It only took seven minutes into the second half for right winger, Avi Libman, 18,  mechanical engineering major, to float a perfectly placed cross into the box that was tapped in for the equalizing goal by defender Jose Agredano, 18, world studies major.

De Anza kept attacking through the right side and it was Libman again who broke through the defense, sending in another dangerous cross that hit off the opposing defender and snuck into the net for an own goal, giving the Dons a 2-1 lead six minutes after equalizing.

With the goal came a significant change in possession as De Anza began to dominate on both sides of the field until the last play of the game.

A win for De Anza was almost certain but Folsom Lake managed to cross a ball that was met by a header and resulted in a last minute equalizing goal.

The referee blew the whistle immediately after the play and De Anza had to settle for an unfortunate ending to a hard fought game.

De Anza men’s soccer team now has a record of 2-1-1 as they prepare to take on San Joaquin Delta on September 20 at home.